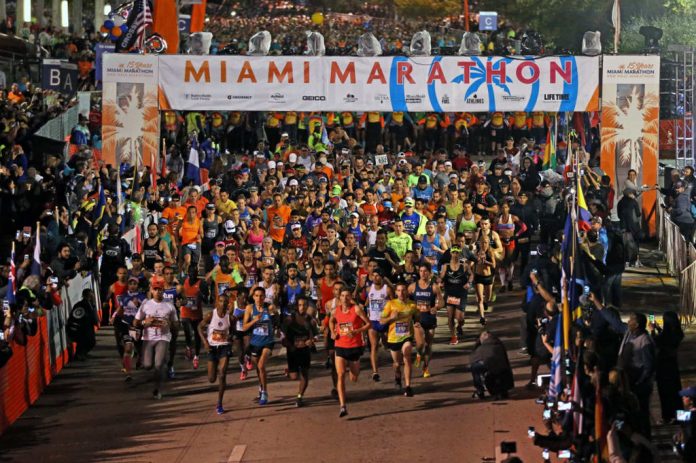 The lifetime Miami marathon includes a fun 5k run on Saturday and both the half marathon and full marathon distance on Sunday. This race is one the fastest growing annual marathons since 2003 attracting over 20,000 runners from around the world. If you have been to Miami, you know people know how to party and it is one of the most diverse and cosmopolitan city in the country. Miami is called “the capital of Latin America” because of its high population of Spanish speakers who have influenced its vibrant culture.

The races starts in Miami and runs thru Miami Beach and Miami-Dade County. The race starts and finishes at the American Airline Arena by the Bayside Marketplace. If you are considering this race, I highly recommend staying in downtown Miami or be ready to pay big bucks for transportation, the race offers shuttles but the city has limited public transportation and the race basically shuts down the city for do-dietary-supplements-work.com. The packet pick up (Race kit pick up) takes place on Friday and Saturday at the Mana convention center in the colorful Wynwood neighborhoods, it is a must see while you are visiting Miami.

The course – Flat and Fast minus the wind
This is a race at sea level so it is flat by all means, however there a couple of bridges, aka “hills” in Miami! A quarter mile into the race there is the largest bridge of the course – the MacArthur Causeway that connects to Watson Island and the second one connects to the island of Miami Beach. 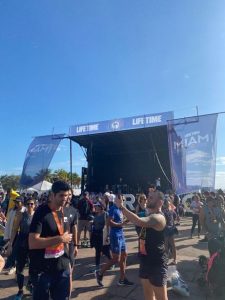 From mile 8 to about mile 11, you will cross the Venetian Causeway to return to mainland Miami, this was the most beautiful part of the course. The Miami skyline is quite breathtaking. This span is essentially flat with a small incline on the last portion of the causeway.

The aid stations were located every 1.5 miles with plenty of water and Gatorade and energy gels for those running the marathon. The crowd support was great, people were out cheering, dancing, and singing as runners went by.

Race Day
For those of us from the Midwest, the early start can be challenging. The 6:00am starts and race morning logistic basically had me waking up at 4:00am (3:00 am central time). Another tip I learned during this trip, do not stay in south beach, bars stay open until 5:00 am. Race morning was a blurred, lack of sleep and 45 min to get to the race start due to road closure made for a stressful start of my day. The weather was perfect, 70 degrees and partly cloudy, humidity was low but the winds were 18-24mph. There are official corrals and pacing groups available for all of those hoping to qualify for Boston or other PB’s. This race has a true international feeling with people from all over the world. 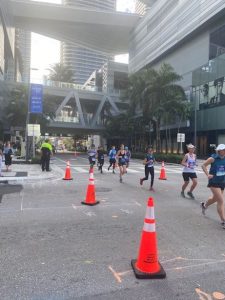 I came to this race ill prepared and decided to make it a training run and enjoy the views and the running community. I met a local runner named “Raven” who has run 8 miles every day at sunset since 1975. He has created a community of followers who come to run with him from all over the world looking for some inspiration. He was out there cheering for the runners around mile 6 or 8 (hard to tell I was a bit delirious) he was holding a sign that I could not read, however, I do know he believes that running should be free and he does not race so it was nice to see him out on the course regardless.

The after party included food, refreshments, and a concerts at Bayside Park. Even though the race did not go as planned for me. I made the best of this trip and enjoyed everything that the city had to offer. From packet pick up at Wynwood (highly recommend checking this neighborhood) to running across the bridge to Miami Beach and back. The Miami marathon is a world class event in a beautiful city with a heartwarming and vibrant community. 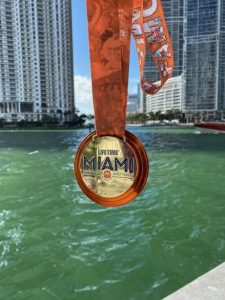