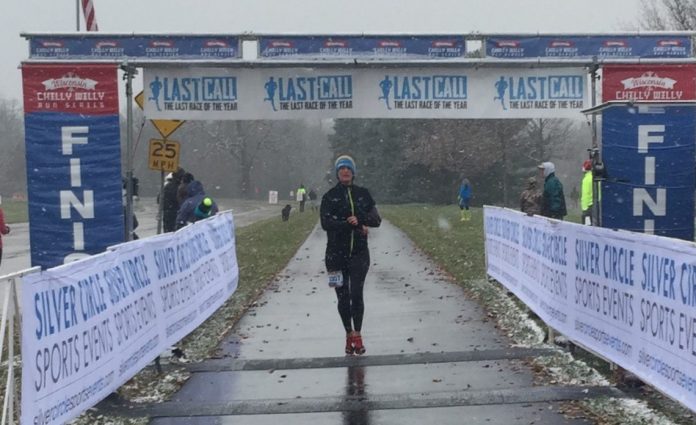 Appropriately named, Last Call, this end of the year race offered a 5K and half marathon option for those runners willing to make the trek north to Waukesha, Wisconsin.

The half marathon started ten minutes prior to the 5K allowing for the longer distance runners to get a head start on the course. About 30 seconds prior to the start gun, the snow began to fall and Vanilla Ice’s hit “Ice Ice Baby” began to play from the DJ stand. There is something quite fitting about having the first snowfall of the year occur in conjunction with the Last Call race.

The race began on the road and quickly turned into the Glacial Drumlin Trial. This fast and flat, out and back course gave runners a good chance to try for a last PR. The trail was completely paved and clear of snow with the exception of a few bridges which became a little slippery for the second half of the race. I found myself slowing down over each bridge crossing to avoid slipping and incurring a late season injury.

If you can handle the hour plus drive northward, this race provides a nice change from the urban road races while still offering flat black top to run on. The volunteers and police were incredible, the race staff was extremely organized and the bright blue short-sleeved tech shirts were super cute.

An added bonus to this race was a toy drive. All runners were asked to bring an unwrapped toy for Sojourner Family Pease Center, a center providing resources and advocacy to keep families safe from domestic violence. The generosity embodied in the running community never ceases to amaze me and this race crew was no different. Most runners walked in with an unwrapped gift to drop off prior to heading to the lengthy restroom line, only the ladies of course.

Silver Circle Sports Events hosts a wide range of extremely affordable races in Southern Wisconsin throughout the year. Last Call Half Marathon cost only $25 for those that registered before June. Like most races, the price increased slightly leading up to a final race day cost of $40, still an affordable way to fit in one last race before the end of 2016.