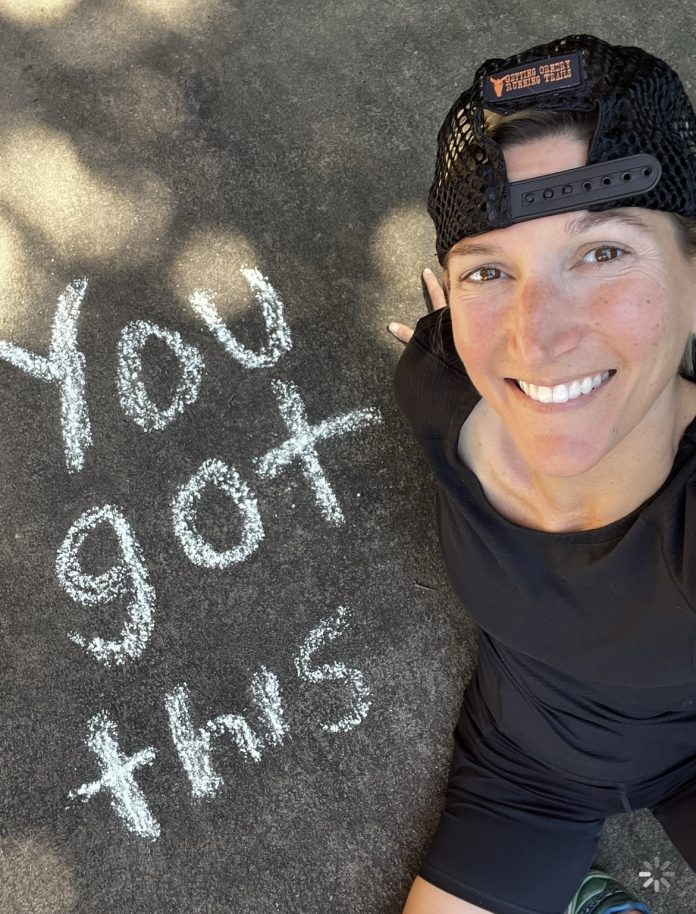 The Life Time Chicago Triathlon has been on the circuit for almost 40 years. At one point, the race was even coined “The World’s Largest Triathlon.” Over the years, athletes from all over the world have come to compete and all of them have a story to tell.

I recently sat down with Deana Nyenhuis, a Barrington, IL native whose story struck me. You see, Deana is pretty much my neighbor. We’ve crossed paths at local group runs and even an occasional open water swim. But when I saw her story slide through my inbox with the title “Inspiring athletes competing in Life Time Chicago Triathlon,” I was a bit floored.

Let’s rewind. Deana grew up a very active child, competing in swim team, soccer, track and cheerleading as a kid. A child this active is bound to have aches and pains, right? Right. Well, so she thought. One day her aches and pains transpired into a lump in her neck. Deana’s best friend lived next door, and her family suggested it would be wise to have these symptoms evaluated. Considering Deana’s best friend’s dad was Walter Payton and he had recently passed away, Deana and her family didn’t ask questions. A mere 8 months after Walter’s passing, Deana was diagnosed with Stage 4 Hodgkins Lymphoma. The first people to offer advice and comfort to Deana’s family were Brittney and Connie Payton, Walter’s wife and daughter. 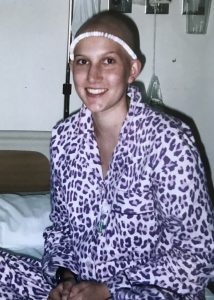 Deana was considered lucky; this was caught just in time. During her sophomore year of high school, she spent 9 months in the hospital, reaching remission after a full year of treatment. Deana and her family decided to take a family vacation to celebrate her newfound health shortly after she left the hospital. On their way home, the family’s Navigator was involved in a major accident, flipping over itself 3.5 times traveling at 75 mph, causing Deana to seek treatment at the Mayo Clinic for her injuries for 3 weeks. 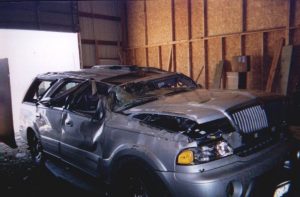 This certainly didn’t come without a price tag. Dealing with cancer symptoms, a recent diagnosis of Fibromyalgia, and now the complications of a major car accident, Deana found herself addicted to painkillers, anxiety medications, and Adderall at the age of 15. Finding focus was a huge struggle. She described most of her life at this time as “fuzzy” and “unclear” while she navigated life as a teenage girl trying to fit in with the rest of the school. Control was something she’d never had in her life. Medications altered everything about her, including her appearance. As soon as she could, Deana started to control her physical appearance by means on controlling what she did and did not eat. As soon as she started to lose weight, she was given a certain type of attention she’d never known before. Unhealthy? Certainly. Did she know any better? Not at all.

Deana landed herself at the University of Georgia studying finance. She expected to come home for Christmas Break and spend all of her time with family and friends. Instead, Deana found herself mourning the suicide of one of her best friends, Nicole. Nicole, Deana, and Brittney were practically “joined at the hip” and suddenly, Deana’s eating disorder spiraled out of control. Life took a dangerous turn for her and she attempted to take her own life on multiple occasions. 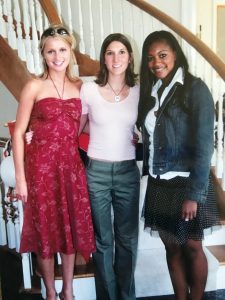 After graduation, Deana found herself working on Wall Street. Success followed her hard work and the Global Finance World quickly turned into her home base. The hours were long, but she was respected and good at her job. While working at Citi Bank, a second cancer diagnosis was discovered. This time, melanoma. As her health spiraled again, doctors’ appointments piled up, pulling her farther and farther away from the office. The pressure to perform was extremely unhealthy and she found herself living blocks away from the office, simply so she could spend most waking hours working. Soon, Deana was forced to make a decision. Live to work, or work to live? In 2016, Deana took a leave of absence from work to come home to Barrington and get healthy. She sought treatment at multiple outpatient centers and played the insurance game for years. She was determined to rid herself of medications, heal her body and mind, and finally start living her life. Pain was something Deana lived with day in and day out. She decided to start moving her body in a different way.

While seeking treatment for her eating disorder in college, yoga was offered at many facilities as a form of meditation and healing. Deana started doing yoga again and… she started running. She started discovering new roads and exploring her surroundings in a way she never had before. It took her much longer than she had hoped, but she realized that she belonged closer to nature than Wall Street. Moving amongst the trees and hearing the birds calling helped bring her peace. Practicing yoga (now a certified yoga instructor) and running on a regular basis also helped Deana naturally treat her Fibromyalgia. She began to understand that “motion is lotion” and she utilized it to her full advantage. When Deana reached out to her employer to discuss her return to work, she was informed that her position was no longer available. Even scarier, that meant her health insurance wasn’t available either. 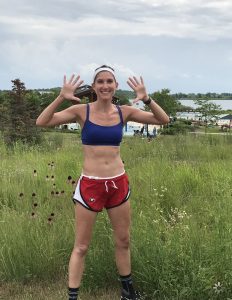 Deana had just spent years becoming the healthiest she’d ever been and she was just given every reason to return back to her old ways. Instead, she used it as fuel and went back to the basics. What was something comforting that she could return to? Coffee. When she worked in the corporate world, she frequented Starbucks on her way to work and many baristas grew to know Deana’s morning routine and her favorite coffee drinks. What if she could be that person for others? She marched herself down to the local Starbucks and was hired on the spot. Instantly, she landed herself a job, respect, and health insurance again. Over time, she grew to know her customers’ routines and she was eager to be a part of their morning.

Now that Deana had found peace and a job, she signed herself up for her first race. The Chicago Rock ‘n Roll Half Marathon in 2018. This was the beginning of her “endurance addiction.” From there, she’s completed more than most runners dream of. 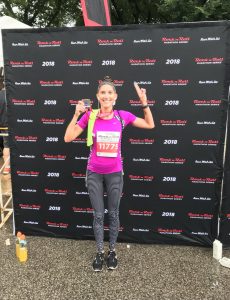 This spring, she encountered her first injury which forced her to change focus. A fall during a trail race caused a bone bruise and she decided it was time to spend more time on her bike and revisit an old pastime, swimming. Fast forward to the present day, and the rest is history. Deana has since recovered from her run injury but came to realize that combining these 3 sports provides a high in life she never truly expected.

The Life Time Chicago Triathlon will be her first official Olympic Distance Triathlon and her emotions are extremely high. The swim has her apprehensive, considering this is her first open water race (and the size of Lake Michigan). The bike is where her excitement lies. She used the words “furry” and “intention” to describe her outlook on the bike portion of the race. Setting herself up for a strong run is what she truly wants. But in order to do that, she knows she needs to be patient in the water, ride with intention, and run with her heart. 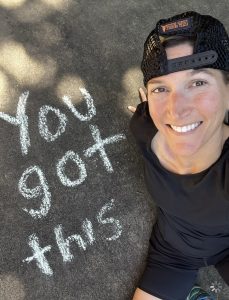 During my time with Deana, I sensed a great deal of emotion. She spoke to me, practically a stranger, about some of the darkest times of her life. She fought back a tear or two, and she spoke with such poise and grace. I could tell the entire conversation wasn’t easy for her. But she mentioned to me more than once that her life got easier when she started to let go of everything weighing her down. For every feeling she’s suppressed in the past, she allows herself moments to cry, scream, or simply just feel those emotions. She’s living a life without drugs and for the first time ever, she’s feeling more than she ever thought possible. She has learned to treat food as fuel, and she allows herself the fuel it needs to carry her through all the miles. Endurance sports and the welcoming community have played a huge role in this. She meets more and more people like herself daily. Those who simply want to breathe in, breathe out, and move on. And maybe run a few miles, too.

Finish lines are bitter sweet, we know that. But I have a feeling that this Sunday is going to be one Deana will remember forever. So, if you find yourself on the Lakefront Sunday morning, be sure to give this pink cheetah wearing girl a shout out. She’s on a mission and nothing’s standing in her way. 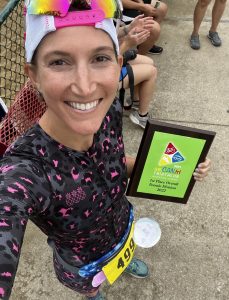