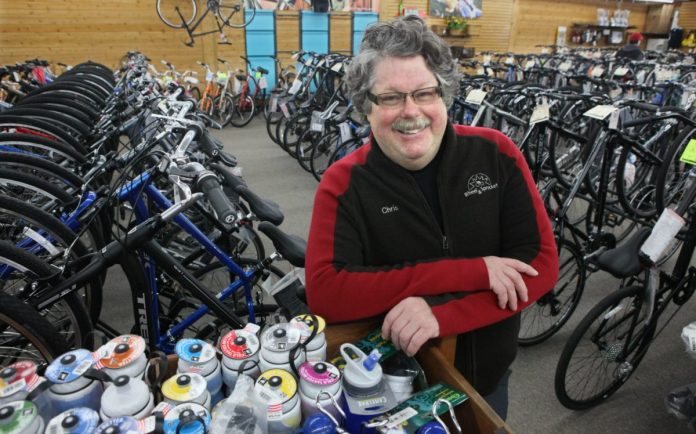 Kegel has long been recognized as a humble and positive advocate in the cycling world; he started as a mechanic at Wheel & Sprocket in Hales Corners, Wisc. in 1973, and by 1989, he was the president and owner of the shop.

Now, Wheel & Sprocket is the largest bike retailer in Wisconsin with five other locations, and there is one in Evanston, Ill.

“Of all the bicycle retailers in the United States — not counting big box stores, there are 5,000 or 6,000 of them — Chris would rank in the top five, not only for business but for community leadership,” says Tim Blumenthal, CEO of People for Bikes, the largest bicycle advocacy group in the U.S. “A lot of people model their bike businesses after what Chris has done at Wheel & Sprocket.”

A “Celebration of Chris’ Life” will take place from 3 to 6:45 p.m. on Feb. 17 at St. Matthias Catholic Parish in Milwaukee. A funeral mass will be held the following morning at 10:30 a.m.

“In lieu of flowers, a tax-deductible donation can be made to The Chris Kegel Foundation,” the family said in a statement. “The foundation has been established by the family to continue Chris’ commitment to improving lives by providing greater access to bicycling.”

All Wheel & Sprocket stores will be closed during the services.

According to Bicycle Retailer, Kegel was a part of International Mountain Bicycling Association, a board chairman of the League of American Bicyclists and a founding board member of BikesBelong, which became PeopleForBikes. As far as his advocacy work, Kegel traveled the world sharing his cycling expertise, including two trips to the White House and two cross-country rides.

“Every time you would go to a bike event in Wisconsin, Chris Kegel would be there, and he’d be pumping up tires, fixing peoples’ bikes. I mean, he built that business one person at a time,” reflects John Burke, president of Trek Bicycle Corp.

In December, Kegel was recognized as an honorary doctorate of business from the University of Wisconsin-Milwaukee during its commencement.