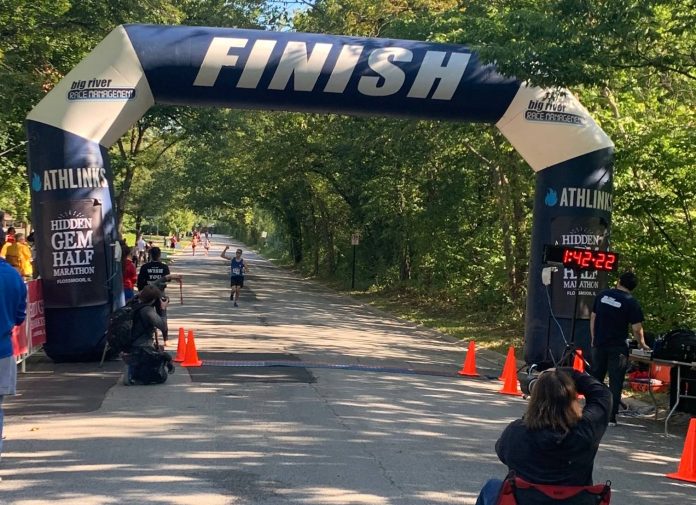 This past Saturday, I had the absolute pleasure of being a part of the very first, and definitely not the last, Hidden Gem Half Marathon in Flossmoor. With over 500 runners for the first year, it’s safe to say this race was a success on all levels.

I had no idea what to expect upon arrival, except that the pre-race communication was great. I had a clear idea of the course, where to park, and how to navigate to the start/finish line. However, I was not expecting to see volunteers with signs directing me to a parking area and then leading me to the packet pick-up area, before escorting me to the start line. The race volunteers were so incredibly helpful before the race that even the most novice runner would have felt comfortable.

The pre-party, I mean, start line, was filled with energetic music, dancing, stretching, and lots of mingling before a local celebrity (and The Voice contestant) began the morning with a beautiful rendition of the National Anthem. Racers crossed the start line promptly at 7:45am and began circling through the residential areas of Flossmoor. The residents of Flossmoor were out in abundance cheering us on, complete with yard decorations, noisemakers, and speakers. For a suburban race, I could not believe the amount of crowd support that runners were treated to. There was rarely more than a half block between cheering supporters throughout the entire course.

There were two highlights of this course that made it one of my very favorite races of the year, thus far. After spending the first few miles on the residential streets of Floosmoor, runners turned onto the campus of the local high school, Homewood-Flossmoor. We circled the campus and spent about one mile on the high school grounds, during which time we ran through the high school pom squads, cheerleading teams, and even the band! The energy and noise level as we ran through the tunneled students cheering us on took me right back to the Wellesley tunnel portion of the Boston Marathon. The mile flew by and I enjoyed every second of the high school experience!

The second highlight came a bit later in the race as we tackled a mile circling through a neighborhood that had coordinated their front yard signage, music, and even costumes around Caddyshack! The amount of planning and preparation that these residents put into making the mile fun for us was incredible.

I was beyond impressed by the race organizers, volunteers, first responders, and residents of Flossmoor who created a true gem of an experience for runners. Definitely add this race to your schedule for next fall. All racers received a long sleeved, quarter zip shirt and a medal, along with a backpack filled with goodies.