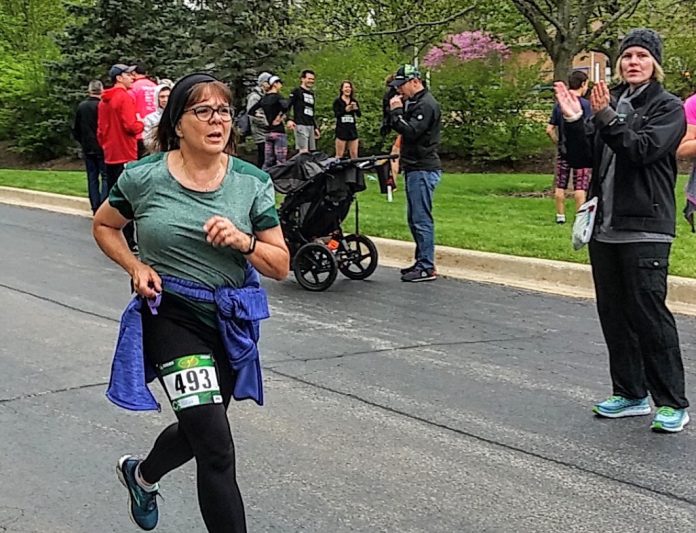 The Midwestern University Sports Medicine Club in Downers Grove, Ill. hosted their 30th Annual Groovin’ in the Grove races this past Saturday. The event included a 10k, 5k, children’s 1k and a 100-yard dash.

Also on hand were military personnel to conduct the Warrior Fitness Challenge; interested participants were scored based on a two-minute sit-up test, two-minute push-up test and their 5k race time. Points are awarded based on overall performance and age. This charity event raises funds for Sharing Connections, an organization which provides furniture and household items to families coping with a crisis.

The race started at 9:45 a.m. which gave everyone ample time in the morning to get ready. I arrived about 90 minutes before the start of the race and used some of the time to explore the sprawling grounds of University’s campus and talk to staff members and volunteers. The school’s gymnasium was open to all and was the hub for packet pickup, fresh coffee, vendors, gear check, and hanging out until race start.

The race start and finish were near the school gym with most of the race being run on residential streets. The course had some rolling hills that offered up a bit of variety. The USATF-certified course was a 5k loop with 10k racers completing two loops. I ran most of the race with a group of three other runners. As we approached the end of the first loop two of the runners continued on to complete another loop for the 10k race. The other runner and I made our way to the finish line of the 5k which became a quick sprint. I was beaten in the sprint but given that the other runner looked young enough to be my son I thought I did well for myself. Good fun.

In celebration of Mother’s Day adult female finishers were handed a carnation as they crossed the finish line. Ironically, I was handed a carnation by one of the volunteers as I came across the finish. I didn’t expect it but cordially accepted it while catching my breath. The male runner ahead of me didn’t receive a flower. I can only surmise that she saw the two of us sprinting to the finish line and thought that my valiant efforts were worthy and maybe she was impressed even if just a little bit. I got beat in the sprint but went home with a consolation prize.

After the race, runners could help themselves to a nice variety of snacks laid out for them. There were massage stations to provide post-race stretching in the gym and face painting and a Moon Jump to keep the kids busy were on hand. Raffle prizes including gym memberships and gift certificates were also given out. Prize medals were awarded to the top three male and female finishers and top three in each age group.

The Groovin in the Grove race event offers something for everyone in the family and helps support a good cause. It’s still going strong after 30 years and will most likely continue on for years to come.