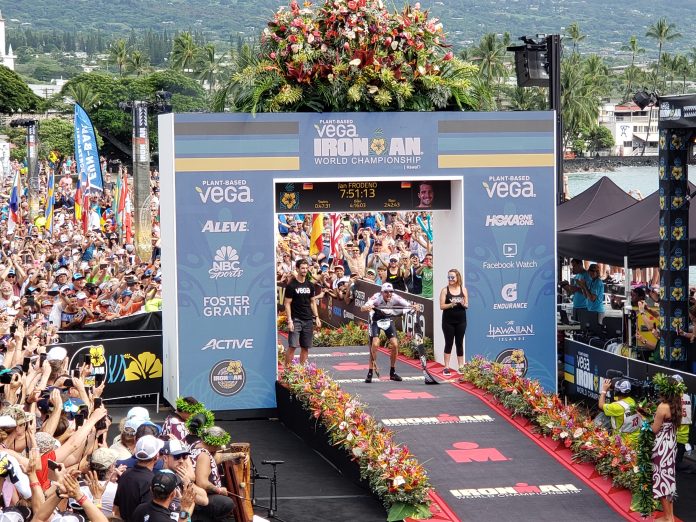 In one of the most unpredictable Ironman World Championships in recent memory, Germans Jan Frodeno and Anne Haug took top honors on a record-setting day. It marks the sixth year in a row that a German man has stood atop the podium, but Haug’s surprise victory is the first time a German woman has won the Super Bowl of triathlon.

Leading up to the race, all the talk was whether or not anyone could upset four-time defending champion Daniela Ryf, and the general consensus was no. But Ryf showed she is indeed human on Saturday and never made it to the pointy end of the race. That put two-time runner-up Lucy Charles-Barclay of England in the driver’s seat, and the former elite open-water swimmer took control of the race from the gun, leading out of the 2.4-mile swim in Kailua Bay in 49:02.

The 26-year-old Charles-Barclay extended her lead on the rest of the elite women’s field throughout the 112-mile bike leg from, entering the second transition with a lead of more than eight minutes on Haug and Australia’s Sarah Crowley.

Haug—a 36-year-old German who finished third in her Kona debut last year—took off on a tear on the marathon, ticking off six-minute miles as she tracked down Charles. The Brit was able to hold off the German for 16 miles before the inevitable pass.

Haug never wavered throughout the final 10 miles, finishing the marathon in 2:51:07, which is the second-fastest marathon in the history of the race. He final time of 8:40:10 now stands as the third fastest in the race’s 41-year history.

Crowley overtook Charles for second position briefly, before Charles made a rare late-race re-pass to take the runner-up spot for the third consecutive year. Crowley rounded out the podium in third, with Heather Jackson of Bend, Oregon, finishing as the top American woman in fifth.

2008 Olympic gold medalist Jan Frodeno entered the race as a two-time champion (2015 and 2016), but for the past two years, he’s had to watch his countryman Patrick Lange run to the win. After sitting out last year’s race due to a sacral stress fracture, the 38-year-old German returned to dominate the race and stake his claim as being perhaps the greatest male triathlete in history.

Frodeno was second out of the water behind Australian super-swimmer Josh Amberger and then found himself in a lead group of men that included 2012 and 2016 Alistair Brownlee and American Tim O’Donnell. Frodeno was the aggressor, taking the lead just before the halfway point of the ride and building his advantage on the return trip from Hawi to Kailua-Kona. Lange pulled out of the race just before the 40-mile marker of the bike, citing a fever that came on a couple of days ago.

Making moves farther back were American Ben Hoffman (second in 2014) and former professional cyclist Cameron Wurf (9th last year) and 2014 Ironman world champion Sebastian Kienle. Frodeno took a lead of a little more than a minute onto the marathon, and none of the chasers could make any moves as he took off at a pace of 5:45 per mile.

O’Donnell, who has been battling a foot injury for the past few months that has forced him to run mostly on an Alter-G, moved into second in the early stages of the marathon. The American wasn’t able to make up any ground on the German, however, as Frodeno flew to the finish in a time of 7:51:13, breaking the course record that Lange set last year by one minute and 26 seconds.

O’Donnell was the big surprise of the day, but was still a distant second in 7:59:40. It was his first time back on the podium for the Boulder, Colorado, resident since his third-place finish in 2015. Kienle rounded up the podium, with Hoffman (also from Boulder) finishing fourth. It was Hoffman’s best finish since his runner-up showing in 2014.