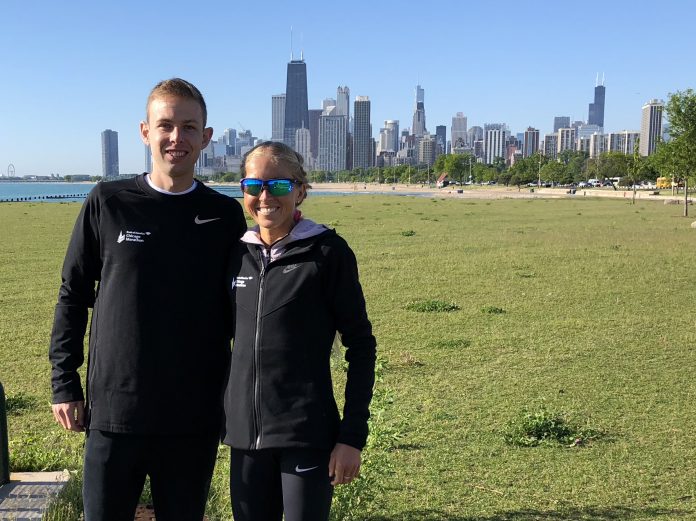 “We’ve met some experienced runners today, some doing a marathon and some that are running for their first time,” Hasay says. “There’s such a wide range, which is great.”

Hasay has been running since before high school, and set many records as a youth runner and further. After running several half marathons, Hasay ran her first marathon in 2017 at the Boston Marathon, and came in third. Come October, Hasay broke the Bank of America Chicago Marathon American Female course record with a time of 2:20:57.

“[I love running because] I just like the feeling of pushing yourself, and I think it can be a great habit to get into.” Hasay adds. “You can start it at any time too, and it’s fun.”

Rupp’s running career begin in high school after being noticed as a skilled soccer player. He went on to set many records in both cross country and track. His long-distance journey began in 2011 at the New York City Half Marathon and earned the third fastest time. Rupp’s first marathon was the 2016 Olympic Trials, and then he won the 2017 Bank of America Chicago Marathon with a time of 2:09:20.

Despite his long and busy career, Rupp says he truly enjoys the sport. While most of his running is competitive, he says he would do it as a hobby regardless because it clears his head.

“Running is a sport where there really are no shortcuts, and you have to work day in and day out,” Rupp adds. “A lot of days you don’t want to do it but you have to get yourself out the door … Learning that discipline carry over into all aspects of life.”

Rupp and Hasay will return to compete in the 2018 Bank of America Chicago Marathon on October 7. Rupp hopes to win again, and then some.

“I’d really like to try and run a little faster,” Rupp says. “This course is just so conducive to running fast with how flat it is, and hopefully we’ll have a good weather day.”

Along with everyone else participating in a fall marathon, Hasay has just begun her training, and really looks forward to the fall race. She too is hoping to run faster than last year.

The rest of the elite athlete lineup has yet to be announced, but Rupp is anxious to see who he will compete against. In the meantime, he will focus on being consistent in his gradual training, which is his biggest piece of advice for anyone running a marathon.

“It’s easy to get excited and start doing too much too soon,” Rupp adds. “And once you get in the race, it sounds cliché, but don’t go out too hard and be ready to be in discomfort. It’s going to hurt, and everybody goes through that, but there’s nothing like crossing the finish line; it’s such an accomplishment.”