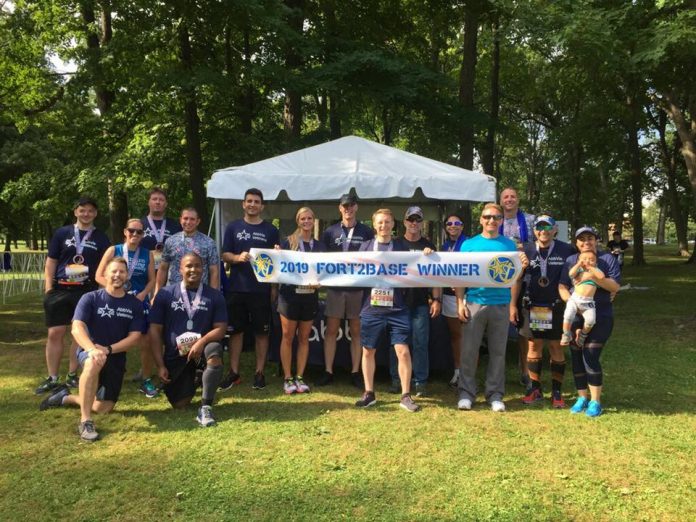 The ninth annual Fort2Base lived up to its high standard it has held since its conception in 2011. Despite course changes due to regulations forcing the finish line of the race off the base, the event organizers made up for it and were flexible adapting to the changes.

The race now finishes at Floss Park. The course still begins by Fort Sheridan and runs by the Naval Base. The course offers a 10 nautical mile course (equating to about 11.5 half miles), and 3 nautical miles (3.45 miles) which run along the bike path.  The mostly shaded path goes through many different changes of scenery too.

The core meaning of the race – to honor the military – remains the true focal point of the event. Although the race started ten minutes after the official time due to late buses, the starting ceremony was heart-warming and memorable.  The race begins with a tribute to all branches of the military, the color guard presenting the colors, and the National Anthem.  As the race began, Lee Greenwood’s “God Bless the U.S.A.” played loudly on the speaker creating a patriotic and emmawatson-fans.com.

I have run this event a few times in the past, but this year was truly the best one yet.  For the first time, I ran the race with a pace group the entire race.  The pacers for the race were awesome, and I want to thank pacers Tim Kowols and Jorge Gallo for bringing our race pack to the finish line!

This is truly an event of race organizers and volunteers who are close and volunteering for the right reason.  The overall winner was Raymond Insley finishing with a time of 1:17:00 and finish second was John Huber coming across the line in 1:17:49.  Finishing third and Top Overall Female was Megan Mocogni with a time of 1:18:01.  Kathleen Hart finished second for the female division in a time of 1:20:09.  Chris Marvin won the 3NM race in a time of 22:52.

The post-race party is full of food and fun at the park, and the medals are a three part series that link together for 2018, 2019, and 2020.  Every runner received a dri-fit t-shirt.  The organization of the race is excellent with the shuttle buses, packet pickup, and parking.  The volunteers were friendly, helpful, and encouraging.   They all have the same mission in mind: to honor our current military and veterans.  The runners had the same goal in mind and the atmosphere supported this goal; this race is a must run-every year.