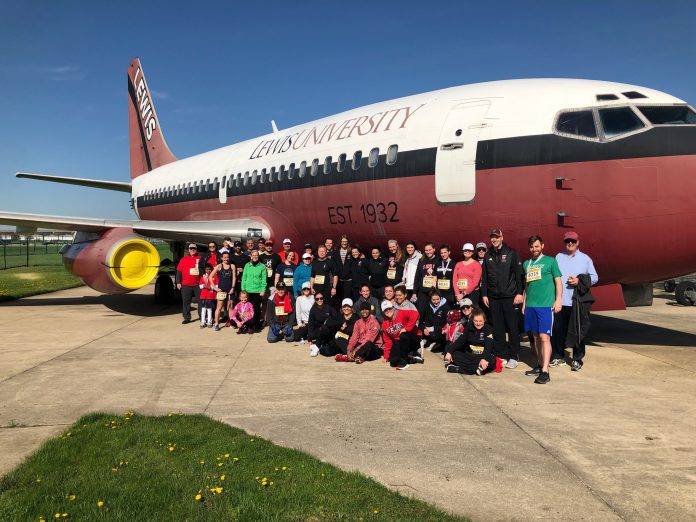 It is always exciting to be a runner in the first race ever held for an organization; the first annual Lewis University Fly for the Roses 5k laid a solid foundation for future races.

The race was sponsored and organized by Lewis University’s Women’s Basketball Team as part of fundraising efforts for the basketball team to travel to France.  Head Coach Sam Quigley-Smith has led the basketball program into great achievements and organized this race with the help of her staff and team.

The race course was fun and challenging.  Participants began in front of the gymnasium and ran through part of the campus.  The course then turned into a cross-country race for about a mile as the course ran through a forested area.  Part of the route was on gravel and trail, and there were scattered hills and inclines making the course challenging and scenic. The route moved out of the wooded area and back on to the campus where a few loops were made through the parking lot areas. The finish line was by the football stadium.

I thoroughly enjoyed running through the woods especially since the weather was beautiful.  Due to it being a smaller race, I was alone on the course at times. However, volunteers were along the race course to direct runners to the proper route.  A few of us runners out front took a small wrong turn back into the woods, but after we corrected ourselves, we were able to laugh about it and finish strong.

Approximately 34 runners finished the race, and many participants walked and came to support.  The Overall Winner and Top Male Finisher was James Weissensel, 25, with a time of 16:26.  An avid runner, Lewis University graduate, and high school track coach, Weissensel led the pack with a great deal of speed and really enjoyed the race. Scott Czerkles was the Second Male Winner.  Joliet Catholic Academy Cross-Country and Track coach Rachel Reyes placed first for the women runners.  Teegan Midlock, age 7, was the first child runner to cross the finish line completing the 5k.

Each runner received a red Lewis University t-shirt.  Registration was easy and available on race day and online before the race.  Snacks and water were given out after the race and music was played at the start and finish line.  An awards ceremony was held for top finishers and also age group finishers. Each winner received a medal with a red, white and blue lanyard. All the participants and volunteers gathered after the race for a group picture in front of the Lewis University airplane. The mood was fun and upbeat as everyone talked and socialized after the race.

The basketball team plans on organizing this race every year and possibly organizing a 10k trail race.  A local 5k supporting a great cause? I am in!