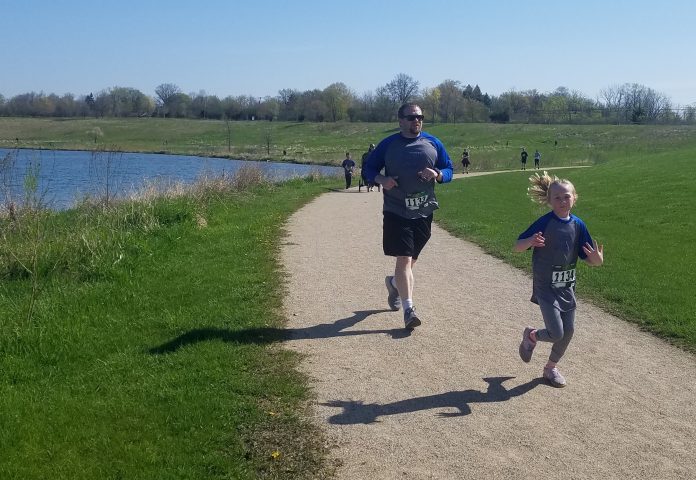 The third annual Five-O 5k was hosted by the Lake County Municipal League on a perfect  Sunday morning for racing at scenic Independence Grove in Libertyville, Illinois. The optional morning packet pickup and ample parking make access to this race a breeze.  This year the attendance was close to 200 runners according to fellow Chicago Athlete Ambassador and Race Director Mandi Florip.

Prior to the race, we were made aware of why it is very special; the proceeds fund the 100 Club of Chicago which provides financial services, resources and support to family members of fallen first responders in Cook, Lake and McHenry counties.  After a few moving words from 100 Club CEO Joe Ahern and Wadsworth Village President Mayor Glenn Ryback, Congressman Brad Schneider sounded the airhorn that started the race.

Independence Grove consists of a vast array of paved and crushed stone trails that interconnect to the Des Plaines River Trails.  The first mile and a half is on the upper outer ring of the West and North sides of the Forest Preserve. There are very subtle elevation changes that made it hard to fall into a rhythm early in the race, especially if you go out too fast.

The course takes a loop around North Bay which has a massive and apparently functional canoe buoyed in the middle. Somewhere during that half mile, the legs started to feel the 40 mile ride I completed the day before and I was forced to walk a bit.  I joked with one of the runners who passed me that the last mile would be interval training for me!

As you come around the bay, there is a sharp turn onto the lower crushed gravel section of the course.  Although well marked, it’s easy to miss. This is why every runner should adhere to the mantra “Know thy course!”  There is one last hill at the end of the “gravel mile” before the finish where fresh fruit and water awaited.

The top three male and female overall winners received medals.  While I personally did not have the result I was hoping for, I was just glad to get out there in support of a great cause.  This family-friendly event is rapidly becoming one of the races that I look forward to every year.