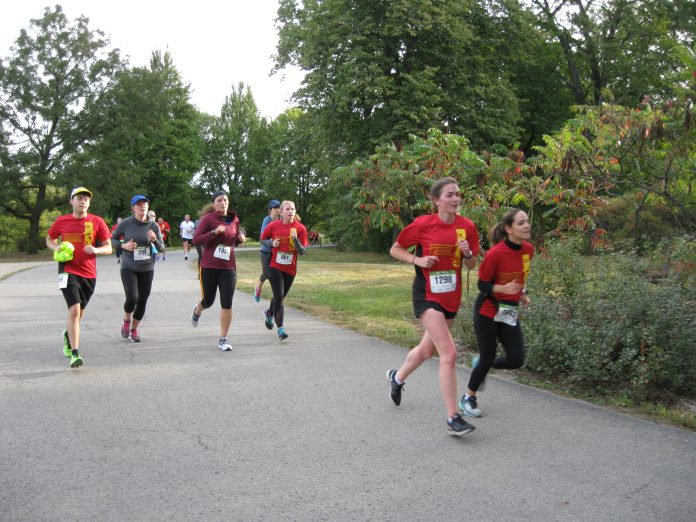 I set up the Chicago Athlete tent around the time the sun came up on Sunday morning at the Morton Arboretum in preparation for the Fall Color 5k.  Most runners wouldn’t be showing up for a while, but as we got closer to the 8 a.m. start time, they started to trickle in. As I was standing under the tent, Mark Buciak, a man well known in the Chicago running community, walked by with his daughters. “This right here is what running is all about, “ he said. “Look at all the smiles and families walking by on this beautiful morning.”

He hit the nail right on the head with that comment.

It was a beautiful morning for a race at the Arboretum. Finally, after being bombarded with summertime temperatures that stuck around way past their welcome date- at least, in terms of good running weather- autumn finally seemed to pop its head around the corner and welcome the almost 1,600 runners that took to the hills of the Arb.

The 5k wound around the east side of the Arboretum, starting and finishing near the Visitors Center. Some of the trees were just starting to change colors and the sun with shining, making for a very pretty run. After the 5k ended, the kids races started and children aged 2 thru 10 were able to show off their skills at different distances. The kids races were packed with young runners, wide-eyed and all decked out with teeshirts displaying whatever motivation saying Nike or Under Armour decided to plaster all over it. They received finishers ribbons at the end, which they were proud to show off to anyone that passed on their way back to the car.

The Fall Color 5k is a challenging and fun way to kick off the autumn months and also a great opportunity to spend a day enjoying nature with your family. The Arboretum also hosts a 10k run in the spring, but runners and cyclists can be seen on the roads all throughout the year training for their next race and enjoying all it has to offer.