Home Features Working {Out} Together 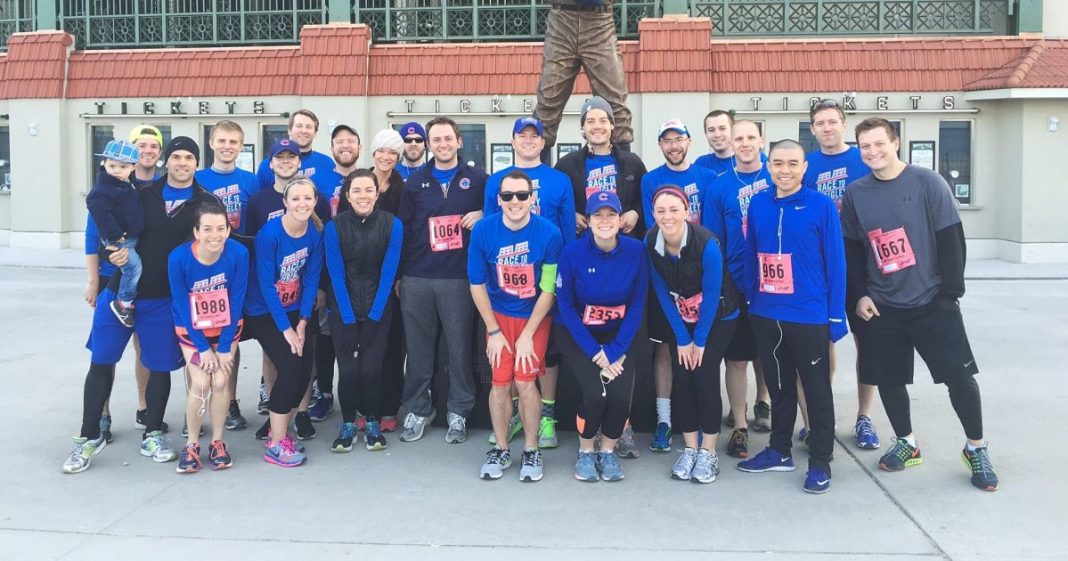 After a nine-hour workday, it can be difficult to muster up motivation for a workout, and setting an earlier alarm to exercise can be even harder. But what if you had a group of people at work to motivate you on a daily basis, before you had the chance to make excuses?

More and more, companies are incorporating fitness programs into their employee’s work schedules because they realize how important it is to make time every day for health. Some hire a wellness representative to help employees create meal plans or exercise routines; others may have a cafeteria with healthy options or a gym built into their office that employees can utilize; now, the new fad is work sponsored clubs, where employees form a club with the sole purpose of exercising together, before, during or after their work day.

No Two Clubs Are Alike

After constantly being around athletes, Jorge Quezada, Benefits Coordinator for the Chicago Cubs, wanted to carry over the team’s enthusiasm to the non-athlete employees. As a runner himself, Quezada gathered some of his coworkers and went out for a run after work one day in 2013.

“Now we have 35 to 40 people, and 15 really committed runners,” Quezada says. “We know how busy it gets, especially during the Cubs’ season, and many of us don’t have time to go home and workout.”

Appropriately, Quezada’s club kicks off its season with the Race to Wrigley 5K in April, and it goes through the end of September. The group meets twice a week and runs anywhere from three to seven miles down the Lakefront Path.

Life Fitness also uses the Race to Wrigley 5K as a start to its running club’s season; in 2011, Alex Dy, Schiller Park’s Sourcing Specialist, decided to take the company’s devotion to health a step further by getting a few of his coworkers involved physically. Now the club has 85 runners.

“I gave it a shot and then a lot of people were interested and we kept going,” Dy says. “Everybody pushes each other and it helps everyone grow.”

Dy’s club is slightly more of a commitment than other clubs, with an average schedule of 10 races throughout the summer; each member pays $120 which includes a uniform, races and a few other events. Life Fitness also offers a swimming club and a bowling league as other options.

It’s not just companies with an athletic or fitness focus catching the bug, though; Colleen Kaplan and Melissa Taylor, both teachers at St. Francis High School, started doing yoga together after work, and soon others wanted to join.

“We started doing workouts after school every other week, then people started requesting we do it every week, so we even got t-shirts,” Caplan explains. “We do circuit training, yoga or run on the track, and we did a 5K in the fall.”

Caplan and Taylor’s club has about 30 people, varying each week, and it’s totally free and open.

“It’s given us more reasons to hang out … a lot of times in schools, relationships are formed based on the department you teach in or clubs you do, and we wanted to get everyone to mingle,” Caplan adds. “It’s the most involved I’ve ever felt in a community.”

According to Adam Samano, a technician from OSG USA in Glendale Heights, the relationships in his office has grown stronger from the running club he started back in 2011.

Like the Life Fitness running club, Samano’s club has a more competitive aspect, where they revolve their training around specific races. In fact, many of his coworkers have gone from not running at all to running 15K’s and half marathons, and now OSG pays for employee’s race registration fees.

During lunchtime, employees of Zurich Insurance can be seen running around Busse Woods as part of the Out-The-Door (OTD) Running Club. Financial Analyst Ken Wagner was skeptical about joining at first due to his slow pace, but he has grown as an athlete since he did.

“Within a year, I took minutes off my pace and completed my first marathon,” Wagner says. “I quickly learned that the Zurich OTD Runners embodied a culture of support and encouragement.”

Zurich recently relocated to a new building in Schaumburg, and the running club is already forming a new course for this summer’s running season.

Another big organization that ran with the idea of getting together to exercise is Deloitte; after running to and from work every day for three years, Rob Chenoweth helped start a running club, which now has over 300 employees participating.

While the Deloitte Running Club does focus heavily on event running, such as the Bank of America Shamrock Shuffle 8K and the BTN Big Ten 10K, they also incorporate fun runs, including quarterly happy hour runs and biweekly causal after-work runs.

“I think employees focusing on health and well-being together provide accountability; it’s hard to let down your coworkers if you committed to showing up for a run,” Chenoweth says. “We can get insanely busy at work, so if our leaders can still take the time for their health and well-being, it serves as a great example for the rest of us.”

Run a Club in Your Office

Whether you want that competitive aspect or a more causal health resource for you and your coworkers, there’s definitely some things to consider before you start a fitness club at your workplace.

Kaplan attributes her success to having Taylor by her side as her “partner in crime.”

“Having Melissa to work schedules with helps a lot,” Kaplan says. “Then you don’t have to dedicate your life to it completely, and there’s some flexibility.”

Although he has other leaders to help him, Chenoweth also recruited a few participants to act as ambassadors or leaders for the club. This way, if you can’t be there one day, or get a huge number of interested participants, you have others to pick up your slack.

“We were able to grow quite a bit because we tried to make sure we had an ambassador for each of our business functions,” he says.

He also admits it took his group awhile to get into a routine that worked for everyone, so he suggests new coordinators try different schedules to see what works best for the most people; have some before work and some after, and even try weekend workouts.

Taylor agrees that having flexibility and an open mind is the only way a fitness club will work; because the St. Francis High School club does different activities each week, she’s noticed that the participants are more motivated to try new things.

“When we ask for special requests, it also lightens the mood and breaks the ice,” Taylor adds. “Then we all do it together.”

From Quezada’s standpoint, offering incentives and rewards has become a big motivator among his group; throughout the season, Quezada tracks everyone’s miles, and once they hit 80, they get two points towards the Chicago Cubs Employee Wellness Program. From there, participants are encouraged to hit more mileage with a gift card or Under Armour Apparel as a reward.

However, consistency and positivity are the two biggest secrets to success in Quezada’s eyes.

“I really don’t want the feeling everyone had in high school gym associated with running… not everyone likes it, but keeping it casual keeps people coming back,” he adds. “We don’t set workouts, or pace and distance expectations, we don’t want them to feel forced or discouraged.”

Samano suggests that if starting a fitness group at your company is something you’re at all interested in, then do it now. Chances are, others are looking for a similar outlet for group exercise, so you’ll have immediate interest.

“Employees love it,” he says. “When I first started working here and found out they were going to have a running team I was very excited to participate. Joining the group helped me develop relationships with my co-workers by running together and getting to know them on another level, outside of work.”