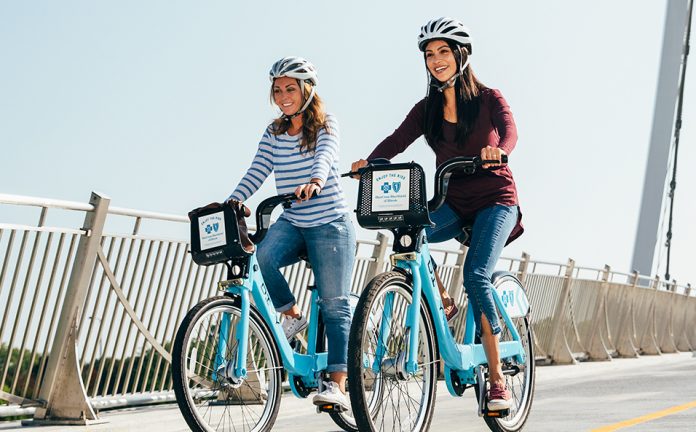 Divvy bikes may be blue, but they are also green! Divvy riders have offset the carbon emissions equivalent of 1,600 cars and 500,000 gallons of gasoline each year with their pedal power alone, Divvy leadership, the Chicago Department of Transportation (CDOT) and Blue Cross and Blue Shield of Illinois, the system’s sponsor announced.

Since its launch in 2013, Divvy has been a signature piece of Mayor Emanuel’s push to make Chicago a greener and more bike-friendly city. Divvy riders have taken more than 14 million rides and pedaled more than 28 million miles since 2013, offsetting over 22 million pounds of carbon.

The system is about to get even more sustainable. This summer, Divvy will launch a new environmentally-friendly method of rebalancing its bike fleet using two new pedal-assist “Bike Trains.” These bike trains hold 16 bikes when full and will replace two of the iconic blue vans that move bikes and ensure availability throughout the Divvy service area.

“Divvy is an important tool in the City of Chicago’s efforts to fight climate change and we are very pleased to announce that Divvy will be doing even more to reduce our carbon footprint starting in June,” said CDOT Commissioner Rebekah Scheinfeld.

While the Environmental Protection Agency estimates that transportation accounts for 28% of greenhouse gas emissions nationally, Divvy offers Chicagoans a zero-emissions choice for getting around the city for work, school and recreation.

“This year, we’re following Chicagoans lead by introducing bike trains to our fleet– to help ensure that Divvy is the greenest way to get around,” said Michael Critzon, Divvy General Manager. “As the weather warms, we encourage you to go green and try the blue bikes!”

Divvy is operated by the bike share company Motivate International, Inc. under contract with the Chicago Department of Transportation (CDOT).

“UIC is pleased to partner with Divvy and to promote its use to our students, faculty, and staff. With 15 stations on or near campus, Divvy has been a great no-carbon way to get to and around campus and helps us reach the UIC Climate Commitment of Carbon Neutral campus” says Dr. Klein-Banai, Associate Chancellor for Sustainability at UIC.

Divvy ridership has continued to grow year over year, as new bike lanes are implemented and new pricing like the $3 single ride make it even easier to get around Chicagoland. Since the new $3 fare was announced on Feb. 1, more than 15,000 people have grabbed a Divvy for the first time.

New members are encouraged to download the Transit app for iPhone and Android to get around the city.

Think you’ve got enough pedal power to move more than a dozen bikes at once? Divvy will be hiring Bike Train drivers soon.