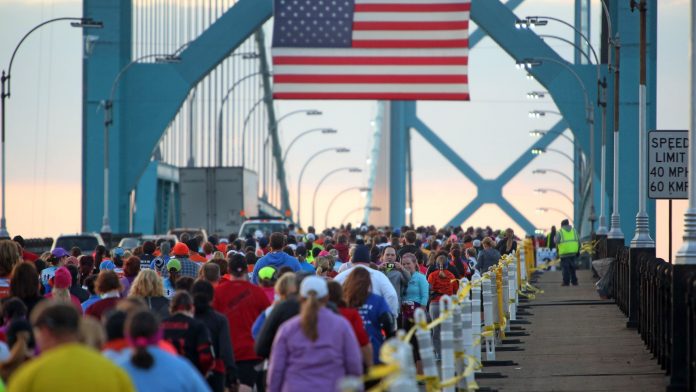 The 41stAnnual Detroit Free Press/Chemical Bank Marathon was held this past weekend in Detroit, Michigan, and I was lucky enough to be a part of it. Just a five hour drive from Chicago, this marathon is a must-do! An international marathon, the Detroit Marathon crosses the Ambassador Bridge into Canada, giving runners bragging rights of running in two countries during the course of a full or half marathon.

Marathon weekend began on Friday when the Expo opened at the Cobo Center in downtown, Detroit’s equivalent to McCormick Place in Chicago. Packets were full of goodies, including a good-looking race technical t-shirt, and the expo was full of great vendors and information, even including a booth of puppies from the Michigan Humane Society.

On Saturday, the Detroit Marathon offered a competitive 1 mile, 5K and kid’s fun run. Many runners who prefer shorter distances came out to enjoy the morning. I ran both races and enjoyed the opportunity to see a portion of the marathon course before race day. As a participant in the 1 mile, 5K and marathon, I was considered a “Supreme Challenge” runner and earned three race shirts, three race medals, and an extra medal noting my participation in all three races. Pretty cool!

On Sunday, the Detroit Marathon held its 41stannual race. With over 26,000 runners, a full and half International course and a half domestic US-only course, the logistics sounded overwhelming. However, Detroit Marathon staff produced an extremely well-organized and executed event.

Runners were kept up-to-date with constant communication via email leading up to race day. Packets included a detailed race map with information about corrals, courses and parking. And, there was a booth full of amazing ambassadors ready to answer any questions racers had.

The full Marathon and International Half Marathon both started promptly at 7 a.m.; Runners were seeded into corrals based on anticipated finish time and released every two minutes to avoid course congestions.

After the first two miles of the course, runners had the unique opportunity to run across the Ambassador Bridge into Canada. Participants had to run with their passports and border agents watched like hawks to ensure that all runners had their bibs displayed. The bridge is just under a mile and showcases the beauty of Detroit and Windsor. It was breathtaking to run over this landmark just as the sun was rising.

Runners then ran the streets of Canada for a few miles before turning into the Detroit-Windsor tunnel to re-enter the U.S. This tunnel literally goes underneath the Detroit river and was shut down to vehicular traffic as runners crossed into the United States. This border crossing experience is reason enough to run the Detroit Marathon.

Following the tunnel, runners looped back through the downtown area, running by city landmarks and through neighborhoods. Residents were out in abundance offering food and drink from their own homes and cheering on the crowds of runners. It was overly clear that Detroit residents fully supported the runners taking over their community for the morning.

In addition to the unique aspects of running a marathon that crosses International borders, this race also routes runners onto Belle Isle, an island owned entirely by the City of Detroit and managed as a state park. Runners left Belle Isle to finish the Marathon on city streets and circle back to the start line.

It was a chilly morning with a mild headwind. Although, as all Chicagoans know, the wind is nothing to take for granted. I was comfortable with the wind speed, until I hit Belle Isle, where I was challenged by a relentless headwind as I made the loop back into town. It was only for about 2 miles, but at mile 21, that’s a big deal!

The course was well staffed with aid stations throughout offering water, Gatorade and gels. Marathon staff and volunteers, Detroit Police Officers, medical staff, residents, crowds and my fellow runners made this an unforgettable, extremely well organized and executed, and memorable event that I, for one, can’t wait to return to.