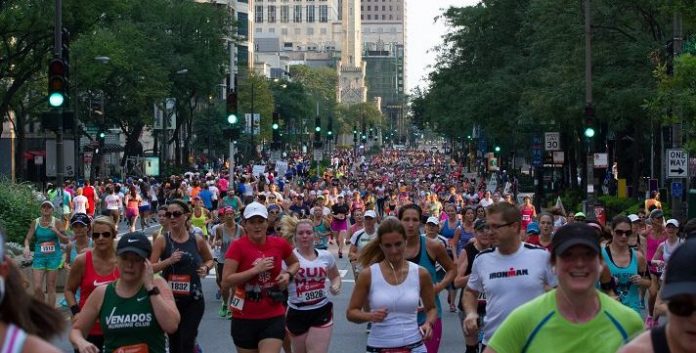 Often known for their special goodie bags and unique races, RAM Racing has worked hard to buck the trend of decreased race participation, and that hard work has paid off.

In June, Running USA released a report stating that for the second year in a row, race participation has decreased; between 2014 and 2015, participation went down 10 percent across the country, following the 23-year “running boom” where participation jumped by 14 million runners.

Increasing registration fees, rising popularity in studio fitness and lack of Millennial runners are all suggestions as to why the decrease in participation continues. Whatever the reason may be, RAM Racing has found a way around it, as it continues to see increasing participation numbers.

For example, the Magnificent Mile Half Marathon and 5K, occurring Sept. 10, is expecting an 175 percent increase in participation from the 2015 race, and the Sept. 18 Bucktown 5K may be capped at 6,000 racers, which would be an all-time high for the 14-year race, according to Robin Monsky, owner of Round Robin Sports PR. The Oct. 30 Hot Chocolate 15K/5K is no different, as early registration alone was up 23 percent. But these numbers don’t come free to RAM, as a lot of strategy and planning has gone into its success.

Steven Ginsburg, CEO of RAM Racing, attributes the company’s success to its strong and cohesive marketing team. In fact, Ginsburg requires his marketing team to “travel like a circus,” as he’s seen other teams who don’t travel together, which often leads to a marketing disconnect.

“I’ve spent the years building a team that got along, which took a lot of work,” Ginsburg says. “But our greatest point of success is the people – we have a lot of good, likeminded people.”

Over the years, the team has realized that producing a high-end goodie bag really drives runners to RAM’s events; the popular Hot Chocolate 15K/5K is known for its fancy zip-up jacket and chocolate-filled package, and the Bucktown 5K, which was RAM’s first race, became known as the “goodie bag race,” with every runner getting a hoodie.

This year’s Bucktown 5K gives all runners a sweatshirt that looks like the Chicago Flag, which Ginsburg thought was “hideous” at first; however, runners voted, and 95 percent preferred it to a more conservative option.

“I’m 52, and the average participant age is 35, so I’m less in touch with our runners and what they want, so we now rely on them to vote – it seems to work,” he says.

However, offering expensive goodie bags comes with pricier registration fees; Ginsburg says that they do get complaints about prices, but there’s no way to change that, and enough people are willing to pay for the quality of a RAM Racing goodie bag and race.

Aside from the goodie bag, RAM strives to offer as many resources to its runners as possible; Monsky says that unlike many large races in Chicago, all race photos are free for registrants. Also, The Hot Chocolate 15K provides a free, personalized training program to anyone who registers.

Ginsburg believes that his team’s decision to convert the Magnificent Mile Race from an all-female race to an open race was another huge move for RAM Racing; because the race’s concept of running a half marathon on the Magnificent Mile in Chicago was already well-recieved, just adding the “RAM touch” helped the race grow exponentially, and gave RAM Racing more attention too.

While these marketing strategies may seem like a no-brainer, giving away luxurious goodie bags and offering several freebies come at a price, and Ginsburg admits that RAM is lucky they can afford its annual $1.5 million marketing budget.

“We just got lucky … we kept adding races, and the more events, the bigger the budget,” he adds. “Here we are with 30 plus events a year, and we’re able to leverage our size and how we market.”

In addition to growing in participant numbers, RAM also has grown within; one major addition they recently made was acquiring Galt Timing for its races. Not only does Galt have an efficient timing service, but Ginsburg says the people they work with mesh very well with the RAM employees.

“We’re not buying companies as we are merging with people like us and growing together,” Ginsburg says.

Yet, participation numbers do not define the ultimate success of a race, Ginsburg says, and it’s more about the quality, service and integrity, which he calls RAM’s core values.

“When I talk to other race directors about how our platform might help them, I say ‘we’re no different than you,’” he explains. “We all pour our heart and soul into the event, and even if we can afford a better goodie bag per dollar, that’s not what it’s about.”

As a result, RAM offers to help with other event’s marketing for free; by offering to do a race’s registration, production, timing or photography that in turn helps grow that event, and also helps build on RAM. RAM also takes pride in the quality of its services, not just the quantity.

“We’re proud to say that we’re the only registration platform in the world that was built by an event for an event, rather than by technology for an event,” Ginsburg says.

At the end of the day, though, he says that like all race directors, RAM Racing strives to put on an event that’s safe and fun, which is what truly has athletes running back year after year.