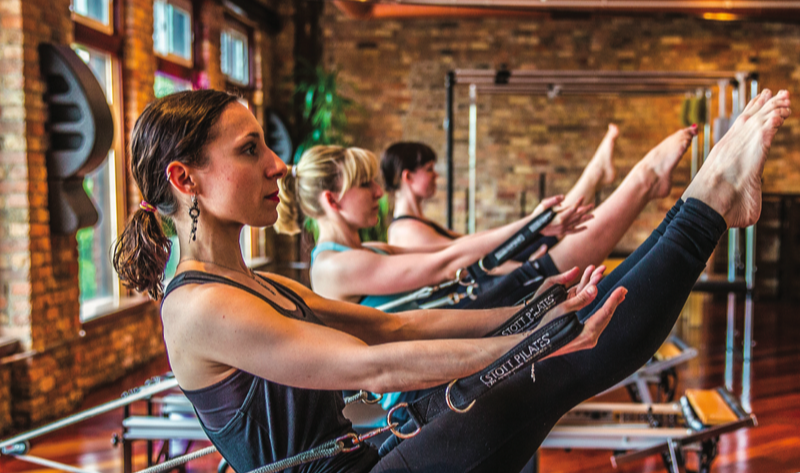 For endurance athletes with goal races in the fall, late summer goes hand in hand with the bulk of training. To avoid burnout and injury, athletes often turn to cross training to add variety to their routines while still building their fitness. Swimming and cycling offer low-impact options for runners, but for those looking for something a bit different, or triathletes already spending time on the bike and in the water, pilates provides an opportunity to augment your training without beating up your body.

Pilates got its start in the early 20th century when the method’s creator, Joseph Pilates, began teaching others the techniques he had developed for building strength and correcting posture as a way to improve overall health. Pilates’s first students continued following and teaching his exact methodology after his death in 1967, which lives on today as classical pilates. As time has passed, others have built upon the original format to create other methods.

“Pilates falls into two camps: classical pilates, which is exactly how Joseph Pilates taught it and how he taught teachers to teach,” Holly Swanson, owner of Core Chicago Pilates, says. “With classical pilates, you don’t stray, you don’t make modifications and you don’t change anything. Then there’s the contemporary world, which is much bigger. It leaves a lot more room for different types of focuses.”

Both Swanson and Tara Gillespie, owner of Harmony Mind Body Fitness in Chicago, incorporate the STOTT method into their pilates teaching, which allows for modifications based on a client’s physical abilities.

“If I have a 24 year old training for a marathon and a 75 year old who just had a hip replacement, I can teach them the same exercises,” Gillespie says. “You might just do things differently within that exercise.”

For runners in particular, the focus pilates puts on working smaller muscle groups can help even out the strength in major muscle groups built up by many miles on the roads or trails.

“Runners tend to be more quad dominant and their hamstrings or IT bands can be quite tight,” Lynne Alderberg, co-owner of Centered on North in Chicago, says, “They need more mobility in their hips, postural alignment and more abdominal work to make their stride efficient when running and their gait more effective so they can use muscles that need to work and turn off other muscles that are maybe working too hard because of misalignment or weakness in abdominals or glutes.”

Erica Agran, a Chicago runner with more than 400 races to her name, found incorporating weekly pilates sessions into her training helped her perform at her best while avoiding injury.

“I feel like everything in pilates is about balance, so you strengthen both sides equally and work on stability,” Agran says. “I haven’t gotten as many one-sided injuries. I used to always have problems with my right hamstring and piriformis. Since doing pilates, when I’m doing a marathon or long run, nothing breaks down or feels out of sync. I feel like my body’s much more even and I don’t compensate as much because I’ve strengthened muscles on both sides.”

Maggie Wolff, a 13-time half marathoner from Chicago, found that regular pilates classes helped her get back on the road after a stubborn case of patellofemoral pain syndrome, commonly known as runner’s knee, derailed her regular training. The exercises she did while rehabbing in physical therapy reminded her of moves she had done during mat pilates classes at her gym in the past, so she kept them up after finishing physical therapy.

“I feel like regularly doing these pilates-style moves has helped keep my glutes strong, which has kept my runner’s knee from coming back,” Wolff says. “Additionally, I feel like I have a pretty strong core, which is beneficial for lots of things in life, but especially running. It helps keep you upright and supported during all the long miles.”

Incorporating pilates into weekly training doesn’t just benefit runners, however. Regan Zubak, owner of Village Pilates Studio in Forest Park, notes that pilates works the body in all directions, and that can help cyclists, swimmers and runners alike get out of the plane of motion in which they tend to exercise.

“When you do an endurance sport, you’re habitually moving in the same pattern over and over again, so you get really strong and really good at that particular pattern of movement, but you can also become really tight and create unhealthy compensations in your body,” Zubak says. “Pilates helps uniformly develop the muscles around the joint and works all ranges of motion in one session. In a 55 minute session, you’re always going to work the body in all directions, and for athletes specifically we’d find where their imbalances are and target that during the lesson as well as giving them a whole body workout.”

You don’t have to spend 55 minutes on pilates exercises every day to reap its benefits, however. Gillespie, a former marathoner, recommends that those who train with music let their playlist continue for two songs after they finish their workout and use that time to foam roll, stretch or do a few of the exercises they learned during a previous pilates session at home to help build strength.

“A 10- or 15-minute hip and ab routine can help keep things in line, and when you’re not training, that’s when you can try to come to class two to three times per week,” Swanson says. “There’s a set of exercises that’s super simple to learn. Any teacher should be able to show them to you to make sure you’re doing them correctly because even a half inch off on alignment can make it totally useless. As long as you have someone to double check you, can definitely find stuff to do [at home].”

For those who want to get their heart rates up while still training in a pilates style, studios like Pilates Pro Works offer what midwest regional master trainer Ryan Castillo describes as “amped up” pilates.

“We take the traditional pilates method and we turn up the volume,” Castillo says. “We still try to keep the same core philosophies of pilates–body mechanics, core strength, knowing what your body is doing–but we turn up the intensity so we can really find a high intensity spot for the method as opposed to traditional pilates, which is super beneficial but very much low intensity. We want to make it more challenging for clientele.”

Wolff has visited multiple local studios, including Studio Lagree, CHI50 and Body R+D, that use Megaformers in their training. Megaformers, based on the traditional pilates reformer, use additional resistance to create a more difficult workout for participants. Wolff says that the combining your bodyweight with the machine’s abilities leads to a more intense class than you may find at studios using standard pilates equipment.

Regardless of the style of pilates you try, incorporating it into your training can help any kind of endurance athlete.

“That’s one of the amazing things about pilates is that it can help anybody that wants it,” Alderberg says. “All you need is that first step to walk through the door, and we take it from there. It can look intimidating, but with the right instruction and being able to learn what pilates is and what it can offer you, it can be extremely beneficial to everybody.”