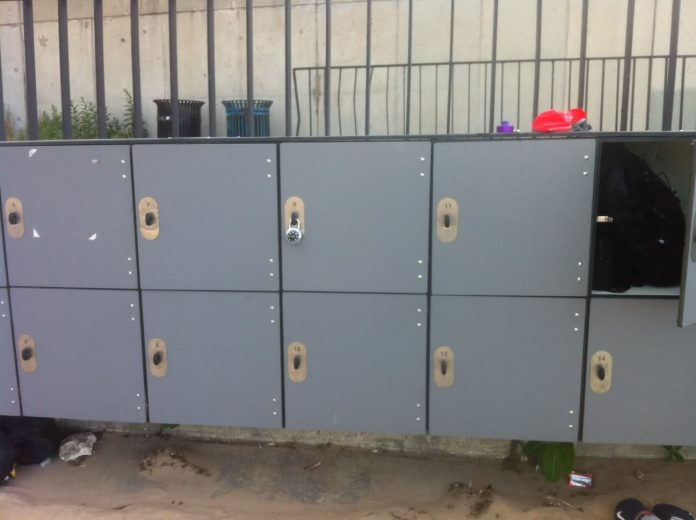 For those training for a triathlon or enjoy exercising on the lakefront, you’re in luck – Ohio Street Beach recently reinstalled 40 lockers, the Chicago Tribune reported.

Lockers used to be available in this location, but they were removed during the construction of a new path going over the Chicago River, the Navy Pier Flyover. The same 18-inch cubed lockers were put back into place this week.

In fact, training triathletes inquired about the lockers recently, according to the Chicago Park District. Although this addition is nice, some speculate there may be limited space due to crowds and popularity in the summer.

Mayor Rahm Emanuel wants to put a triathlon training space on Ohio Street Beach as part of his second-term Building on Burnham parks plan announced in March, according to the Tribune. Construction for this is expected to begin in 2018 when the Navy Pier Flyover is completed, but there are currently no further plans.

However, nearly 900 people have asked Emanuel to improve the location for training triathletes via an online petition; the campaigners want another 20 lockers added, increase bike rack capacity from 40 to 100, distance markers on the seawall, extended swim buoy lanes and a shower with changing area near the beach. They also want the beach to be wheelchair accessible for people with disabilities.

“Ohio Street Beach is ground zero for triathletes, and the primary reason the sport has flourished over the past 34 years here in the Midwest,” Scott Hutmacher from Life Time Fitness wrote on the petition website.

“Expanding the beach amenities to better serve the existing audience will showcase the COC/CPD’s commitment to furthering a healthy way of life for these aspiring athletes, inspire many more to enter the multisport lifestyle, and further set Chicago apart as the nation’s preeminent triathlon destination.”