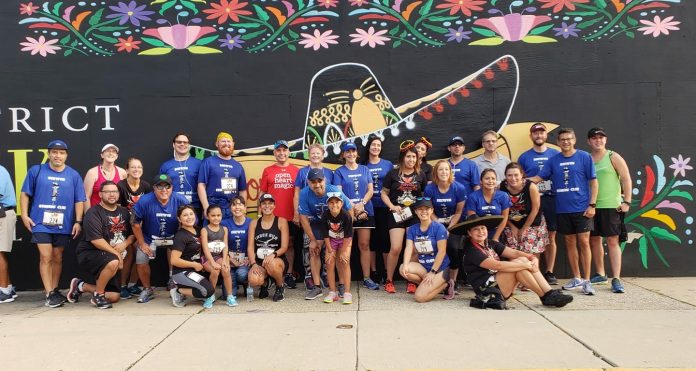 I tend to stay away from inaugural races and didn’t plan to do the local Corrida del Mariachi 5k Run/Walk until I was driving down 16th Street in Berwyn and saw a beautiful race mural on the whole side of a building! How could I not do a race that puts in this much advanced effort?

We found ample free parking and followed the sounds of the mariachi band to the race site. The area was awash in color. Dancers in brightly colored outfits, the band, spectators waving flags, runners with flowers in their hair and of course the mural all added to the festive atmosphere.

This CARA-certified 5k started right on time. One big loop took us on a tour of Berwyn. Along the way we had amazing support from the community. Neighbors were handing out water and treats from their front yards and there was a plethora of signs. The Park District held two signmaking events in advance of the race and invited all Berwyn residents.

It was a humid morning so the organizers added a water station. I felt this was smart as there were a lot of first-time racers participating. The North Berwyn Park District is trying to take an active role in promoting wellness and this race showed it is succeeding.

My friends and I finished and immediately received cute sombrero medals, water, bananas, and oranges. The ticket on your bib could be cashed in for a tamale and jarritos.

The Fiesta Raices continued celebrating the Hispanic culture in Berwyn as runners and then walkers completed the 5k or 1 Mile Walk while being serenaded by the Mariachi Band. Timed and untimed entries were offered and the finish line stayed active until the final untimed walkers crossed.

Overall and Age Group Winners received sombreros. Quite a few were earned by members of the Berwyn Runners and Walkers Club – a club I didn’t know existed until that morning. I promptly joined!

There was nothing I didn’t love about this race. There were almost 700 participants of which 243 were timed runners. Every athlete of every ability received a first-class experience whether in the 5k or 1 mile Family Walk. This one will definitely go on my schedule for next year.