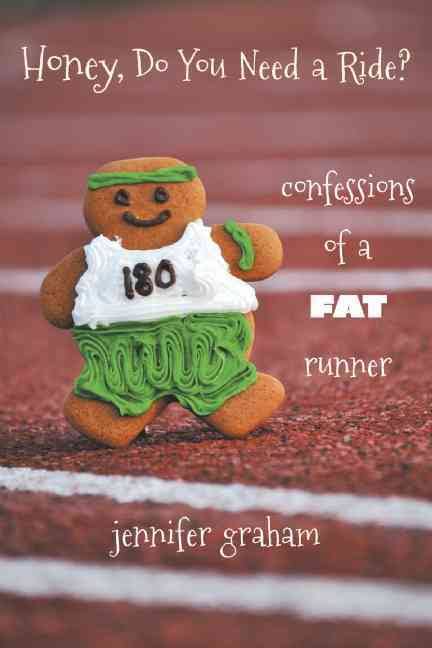 Many running books are about the authors’ experience running in a foreign country, or training for an ULTRA, and tend to follow the same chronological, descriptive format. Jennifer Graham’s “Honey Do You Need a Ride? Confessions of a Fat Runner,” however, adds a new spin to running reading.

The title in itself suggests the sarcastic voice Graham is going to take on, and the cover image of a gingerbread cookie dressed in running clothes made of frosting adds to the subtle humor before even opening to page one. When the reader does get to page one, the chapter title “The Shadow Yells Walrus” jumps right into Graham’s wit, and she immediately acknowledges the title by saying, “The problem with being a fat runner is this: Everyone wants to give you a ride.” This was the first of hundreds of times I actually laughed out loud during this read.

As the story goes on, Graham tells her experience as being a runner who was given the genes of being overweight – often does she allude her weight to her passionate relationship with ice cream, and her bluntness makes her a very trustworthy and likeable narrator. With any story focusing on body image comes insecurities and struggles, and Graham identifies hers without shame, which I found to be very respectable. She’s a runner simply because she enjoys running, not to become a “skinny Shirtless Wonder,” as she often refers to others she passes on the streets.

The combination of sarcasm and humor makes this book an easy read, but it also discusses a very important topic; so often are runners stereotyped as tall, skinny people, and when someone breaks that image, people question their motives for running. While Graham explains she initially began running to lose weight, it has become something she looks forward to each day, no matter what her body looks like at the end.

“She knows that running, like a good book, can help you to live, and she’s every bit as serious, dedicated and impressive as the folks at the front of the pack. She may, however, be funnier and more fun than most of them,” author Rachel Toor says about Graham.

I think all athletes, and people in general, will learn a lot from Graham – because body image is such a prominent issue today, it’s refreshing to hear of someone who learned to fully accept herself after years of trying to change. Whether you are fast or slow, tall or short, fat or skinny, Graham indirectly negates the stereotype and makes all runners feel like they can accomplish whatever they set their minds too.

While this book is a few years old already, published in 2012, it’s definitely one that will remain relevant on a runner’s bookshelf for a long time.