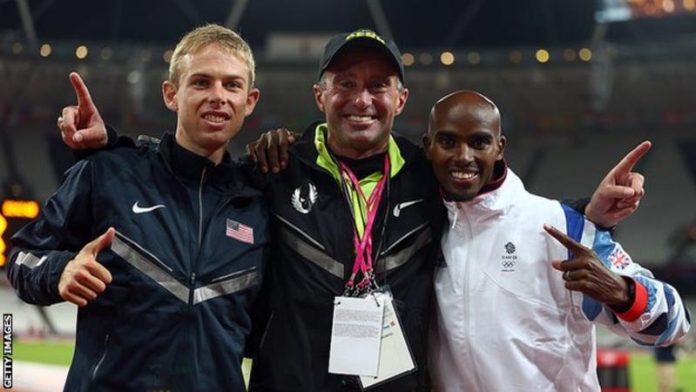 It appears distance running is finally having its Lance Armstrong moment. Alberto Salazar, head coach of the Nike Oregon Project, has been banned for four years by the U.S. Anti-Doping Agency (USADA) for three violations. Salazar is the current coach of Chicago marathon favorites Galen Rupp and Jordan Hasay, and he coached Britain’s Mo Farah (also competing in Chicago) from 2011 to 2017. The USADA investigation dates back to 2015, when Farah was Salazar’s most prominent athlete. Farah won last year’s Chicago Marathon in 2:05:11.

After last year’s race, Salazar praised his former pupil: “He already has shown he is one of the greatest distance runners ever on the track. Whether he is the best marathoner; I would put him right up there with Eliud Kipchoge,” he told The Oregonian.

Dr. Jeffrey Brown, an endocrinologist who worked with the Nike Oregon Project athletes and was paid by Nike, has also been banned for four years. USADA did not announce any bans or sanctions for any of the athletes they worked with. Farah, Rupp and Hasay will not face any sanctions that would prevent them from running in Chicago on October 13.

The investigation began after a joint report by BBC and ProPublica in 2015, which brought up allegations of doping and shady medical practices by Salazar and Brown. Crucial to the investigation were whistleblowers Steve Magness and Kara Goucher—both former elite athletes who trained with Salazar—who detailed how they were encouraged to take unprescribed medications to enhance performance. Both faced severe backlash in the running community for bringing allegations against the most powerful company and coach in the sport.

The doping charges were officially brought against Salazar by USADA in March of 2017, according to BBC, which began a more than two-year-long legal battle between USADA and Nike-backed lawyers. Yesterday’s ruling came after two independent three-member panels of the American Arbitration Association rendered their decisions.

The three violations brought against Salazar and Brown include trafficking testosterone, tampering with the doping control process, and using a prohibited method to administer L-carnitine. Salazar issued a statement on the Nike Oregon Project website late Monday saying in part: “I am shocked by the outcome today. Throughout this six-year investigation my athletes and I have endured unjust, unethical and highly damaging treatment from USADA.” He goes on: “I have always ensured the WADA code is strictly followed. The Oregon Project has never and will never permit doping. I will appeal…”

The IAAF announced Tuesday morning that it has deactivated Salazar’s accreditation for the on-going World Championships in Doha, Qatar. Salazar is also the coach of Dutch-Ethiopian athlete Sifan Hassan, who won the world title in the 10K on Sunday in Doha. In July, Hassan set a new world record in the mile (4:12.23), eclipsing a mark that had stood for 23 years.

At present, it doesn’t appear the Salazar ruling with have any effect on his former or current athletes’ ability to compete, and none of them have tested positive for any performance-enhancing drugs.