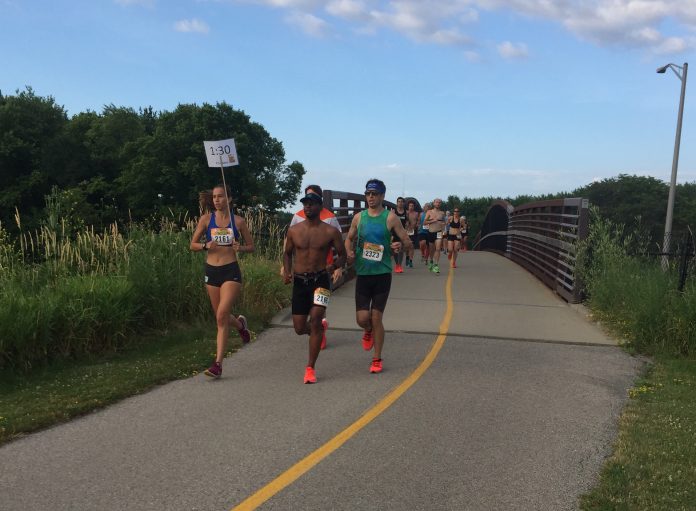 Jingle Bell all the way in the hot sun of summer!  On Sunday, approximately 700 runners participated in the second annual Christmas in July Half-Marathon and 5k.  The race was designed to embrace the Christmas spirit in a different and fun fashion.  This event was also held in Saturday in Indianapolis, and a discount was offered for runners to sign up and run in both cities.

The course went through Busse Woods Forest preserve.  Plenty of parking was available at the start of the race in Elk Grove.  I ran the half marathon, and the course made a giant loop through the forest preserve with two mini-out and back loops at the beginning and the end of the course.  It was mostly flat with a couple of small inclines.  Plus, being in a forest preserve meant there were a lot of bathrooms along the way.

There were plenty of water stations, but unfortunately, they ran out of water cups, and on an extremely hot day, this was an issue for many runners. The race director sent out an email apologizing for this, and ensured it would not happen again. The only other issue was a few moments of near collisions with bikers due to the path remaining open, but everyone understands the importance of sharing the path.

The swag was awesome! Each runner received a sleeveless bright yellow dri-fit Christmas shirt and a bag, and at the finish a blinking Santa Medal. However, I did think the race throughout would have more of a Christmas-y atmosphere.  Hopefully since it is still a new race, they will add more to add to the holiday spirit in July!

Nearly 400 runners completed the half-marathon, and Drew Muller, age 45, finished first with a time of 1:24:21 and Landis Huffman, age 37, finished immediately after in 1:24:48. A huge shout out to the women runners in this race; there were many women in the front of the pack.  Corinna Pena, age 18, finished first for the women and sixth overall with a time of 1:29:38. Marie Billen, age 38,  finished second and eighth overall in 1:31:00 and Elizabeth Deutsch was third for the women and ninth overall in 1:31:50.

Over 250 runners finished the 5k.  Nick Serio finished first overall with a time of 18:48.  Ande Wegner was overall female winner in 24:15.  The race provided an opportunity for fun for every runner and walker.

I would definitely do this race again; it was a great course, with great support, and good holiday spirit … and popsicles at the end!