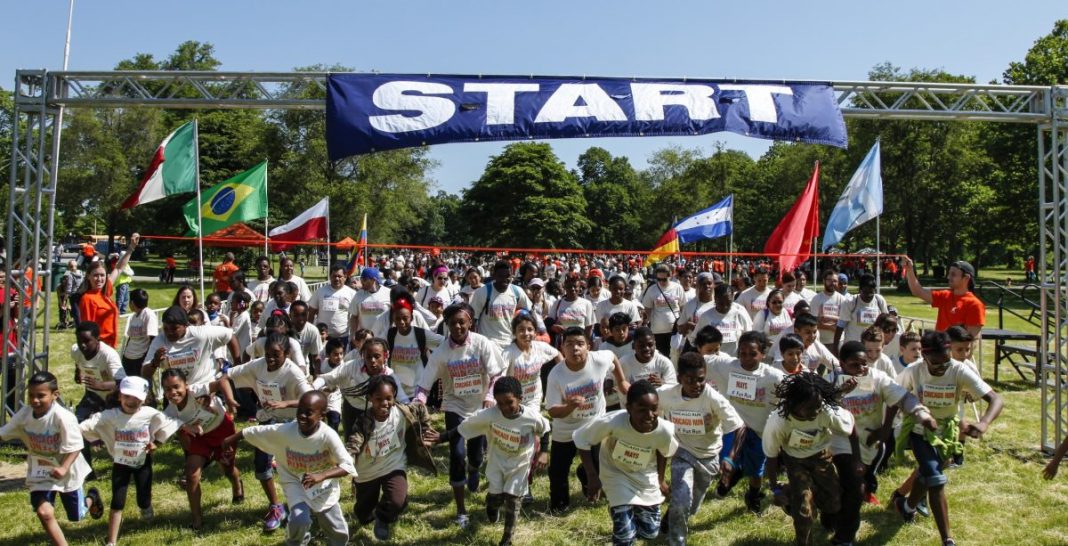 Minutes after the final bell on a Wednesday afternoon in late February, 50 middle school students at Gage Park’s Sawyer Elementary School mill around a hallway, talking about the day and laughing at one another’s phone screens. After some encouragement from their coach, they begin stretching in preparation for their after-school run.

Three weeks before their big race of the winter season, the CARA Lakefront 5K on March 18, the Sawyer runners were blessed with perfect running weather: mid-50s with a light breeze. After running six half-mile loops around the school grounds, the kids congratulate one another and unwind with snacks.

Sound like a typical cross country practice — but the runners are only a few of the 17,000 students participating in Chicago Run, a nonprofit that uses running to promote activity in Chicago Public Schools.

The after-school running program offers fall, winter and spring seasons, each ending with a 5K race. Marlene Avila, a Running Mates coach and sixth grade teacher at Sawyer, says she appreciates a rare opportunity to promote fitness during the winter. In inclement weather, students run and do strength drills in the hallways

“It was just a good way to keep kids busy in the winter time. Especially being in Chicago, we don’t have a lot of time to be outdoors or just being fit,” Sawyer says.

Their physical activity has improved their concentration and enthusiasm in the classroom as well, Avila adds.

“Their energy level’s a lot higher. They’re more motivated in class whereas they were more sluggish before.”

But for Avila, the process of self-improvement beats the physical benefits. Runners gauge their fitness at the start of each season with a pacer test and from there, slowly increase their mileage. Then, they do another pacer test to measure progress.

When they cross the finish line after months of practice, runners cherish their accomplishment.

“They’re so proud, they’re pumped. It’s a big achievement,” Avila says. “One of my girls last year, she had never ran something like this, three miles is a lot. Her family’s not fit and seeing her cross, she was so proud of herself.”

Reflecting on their first race, many of the students agree.

“I was so happy,” said Isabela Alvarez, a seventh grader, “I never thought I could do that.”

At next week’s Lakefront 5K, the team will have another opportunity to reap the benefits of their hard work. How are they feeling before race day? Their coach says that her runners, most of whom are three-year veterans, are ready- and raring for some PRs.

“They know how well they did in the last race and they’re like, ‘OK, now I’m going to go for this time.’”