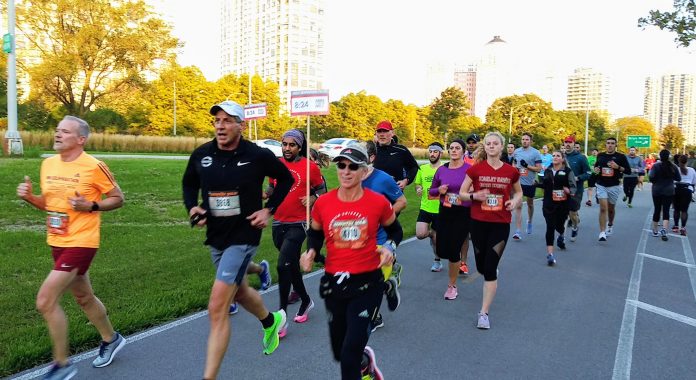 All Community Events hosted the fifth annual Chicago Country Sole Half-Marathon, 10k, and 5K Run/Walk this Saturday at Montrose Harbor under ideal running weather. The 5K kicked off at 7:05 am with the other distances starting ten minutes later. The event helps support the Fetching Tails Foundation. The course start and finish are at Montrose Harbor with the longer, half-marathon course running north to just past Foster Avenue Beach where it then turns south to North Avenue Beach before looping back to the finish. This year’s event had a new course layout which was an improvement over last year.

I arrived early enough in the morning for packet pickup that I was able to watch the sun come up over Lake Michigan. It was relaxing to see the morning sun cast a glowing crimson sheen across the lake waters. With only a slight wind from the south and temperature in the upper forties, I was looking forward to running along the scenic lakefront this morning.

My race event started on time and I proceeded with hundreds of others north. I don’t get to run along the lakefront as often as I’d like, but found the areas I was familiar with in better condition than I remembered. There were plenty of aid stations along the way, and even though we shared the lakefront path with others, there wasn’t much bike or pedestrian traffic to impede race participants. Race markers and signage were plentiful, letting runners know how far along they were on the course and where they should turn. At one point, where we slowed down to enter a tunnel underpass, I passed an older couple walking in the other direction. I overheard the woman say, “Oh Harold, look at all those marathon runners.” I heard it clear as day and laughed to myself as I continued. I guess to the untrained eye a group of hundreds of bibbed runners could be considered a group of marathon runners.

Music playing from a live country band in the distance let us know we were approaching the finish line. Participants received custom finishers medal as they crossed the line. Pork slider sandwiches, beans, fruits, granola bars, boxed water and beer were available to everyone after the race. Race results were posted quickly on a large board so racers could see how they fared. Many participants and spectators hung around after the race (as did I) and listened to the band perform.

Steady pre-race email communications kept everyone in the loop about any last-minute changes and important race day details. Parking in the area at that time of the morning is easy to find and at most a short walk to the race center. All Community Events did an outstanding job covering all the bases for this race. I didn’t experience any hitches or issues and had a good time overall.

Timothy Rossi of New York, N.Y. was the male winner of the half marathon with a time of 1:13:26, beating the second-place finisher by more than five minutes. Hannah Post of Chicago won the woman’s race with a time of 1:30:01.