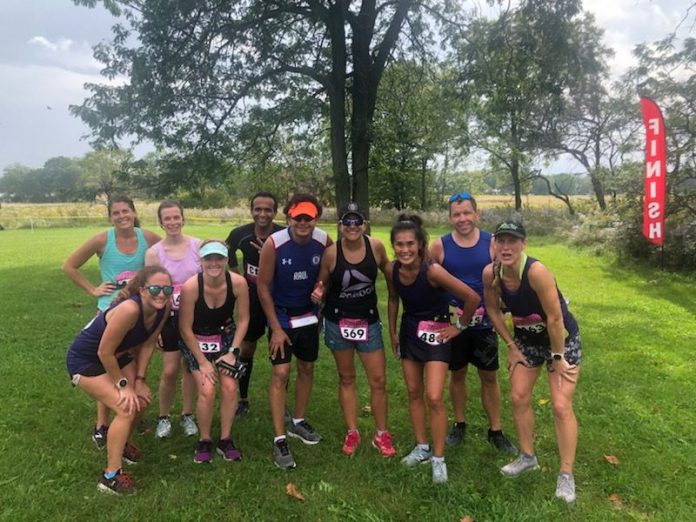 Despite of the terrible weather forecast, over 320 runners showed up to conquer 20 miler hosted by Chicago Athlete.  While many runners chose to participate in this race in preparation of fall marathon, some runners ran to support their friends.
Since this race was considered a fully-supported training run, the organizer provided each runner a bib without a timing chip.  All participants received a gray headband at packet pick-up.  Three convenient packet pick-up options were offered, including before the start.
I drove out before dawn to help other runners accomplish their personal distance record.  I had the privilege of pacing 9:30 pace group and it was the best 20 miles I ever ran.  Most of the runners in my pace group will be first-time Chicago Marathon participants.  Other runners were training for Grand Rapids Marathon, as well as New York City Marathon.
Ten different pace groups were offered in 30-second intervals, from 7-minute pace to 13-minute pace per mile.  Miles are directions were well marked and plenty of aid stations were offered.  Water and Gatorade were available at each station.  Each aid station was filled with amazing volunteers and spectators.
The course was mainly flat and gave the option of completing 20 miles or 16/18 miles depending on runner’s training schedule.  The shorter distance option helped many runners because of the the humidity was very high.  Mother nature wasn’t the only challenging part of this course.  Busse Woods Trails in Elk Grove is a popular place for local walkers, cyclists and runners on weekends.  As a pacer, I had to pay closer attention to the surroundings to give other runners enough warning to stay safe. But the course was never very crowded.
With the fellow pacer, Chelsea Hunter and I had a blast leading the 9:30 runners.  We chose perfect songs such as “Like a Virgin” by Madonna dedicated to all 26.2 first timers, “Livin’ on a Prayer” by Bon Jovi at the 10-mile mark, and we kept singing and sharing tips to conquer 26.2 until we crossed the finish line.
Lauren Doornbos from Plainfield, IL achieved her personal distance record.  “I am ready for Chicago Marathon!”  She exclaimed when she crossed the finish line.  Many more shared the same excitement as this 20 miler gave them the confidence to conquer 26.2.
At the finish line, volunteers were grilling hotdogs, and chips, water and bananas were also available. I wish all the participants the very best at the upcoming fall marathons!