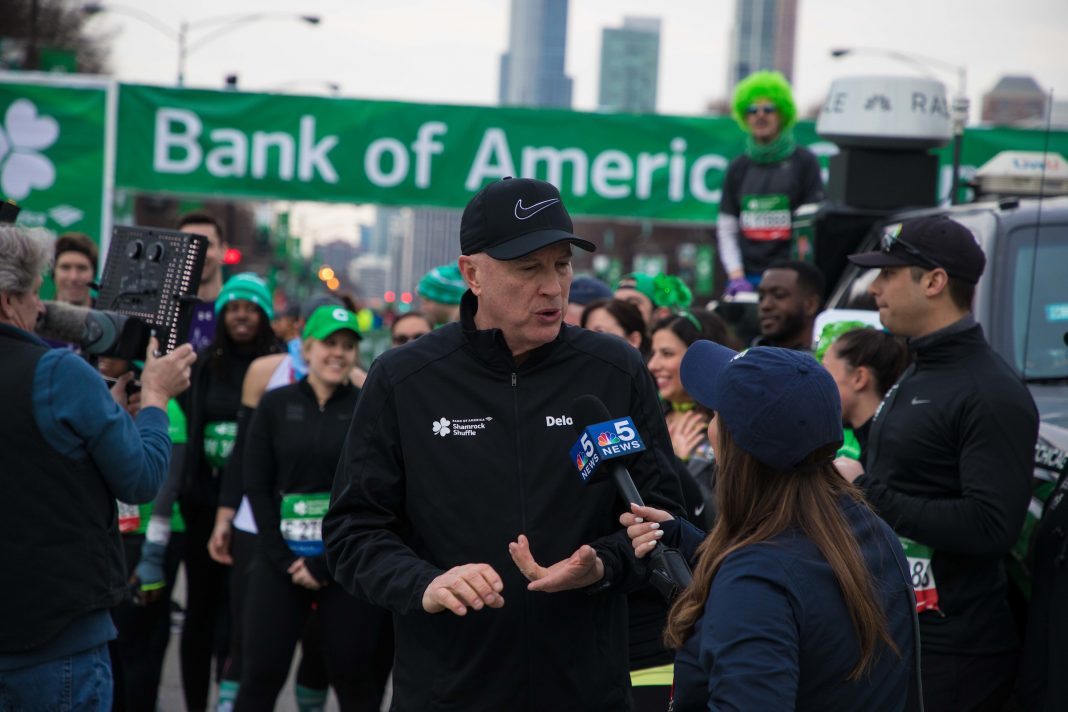 As marathon training season starts, many are thinking about what race day will actually be like, especially first-timers. We thought, who better to answer questions related to the area’s largest marathon than the race director himself?

It really is a year-round process. We are responsible for transforming 26.2 miles of Chicago roadway, which is traditionally used for high volume traffic. It is a city-wide partnership; we work with the police, the park district, states and federal agencies, local businesses, residents, and even churches. There’s probably as many people part of the process as there is in people who run the event. Right now, we’re talking about 2019, but also 2020 and 2021. Between all of the sports teams and universities too, there’s so many different entities that are effected and the key is communication.

While the activity of running has grown and the popularity and demand is amazing … people put a lot of training and sacrifice into the event and it’s an expression of their dedication and commitment. When I started, we had 2,500 finishers, and I had entries in my back pocket that were filled out the morning of. As much as things have changed, the event itself at the core and its genuineness hasn’t.

We have a great relationship with Nike, and they create unique and stylish merchandise. Obviously it is at our expo and key retail locations leading up to and after the event, and we’re now looking at designs and items for this year. They have some things in mind and are going to bring new stuff this year, but I will bring this up to them!

I’ve been very fortunate; I’ve been to the Olympics, World Championships, and all the Abbott World Marathon Majors races. They’re inherently unique. Obviously, I love New York and Boston, those are our partners in North America. My friend is a race director for the Bix 7 in Davenport, Iowa, and it’s always fun to see the city come alive for that event. The Olympic Trials are always fun too. It would be hard to pick one.

The one was that most challenging was in 1993 with the snow storm we had. That’s when we used to do the marathon at the end of October, and we got four to five inches of snow that night and it was 17 degrees. We didn’t really see it coming or have the tools for forecasts we have today. I remember the snow came around 2 a.m., and I woke up and saw the roads covered on Clark and Division. I ran outside, and saw four Chicago plows out. We had a cool aerial picture where the whole city was covered in snow besides the marathon route. We got through it though, which shows the resiliency of our participants. A Brazilian athlete won that year, and I don’t think he ever saw snow. He just wore a singlet and some gloves and ran 2:13.

I ran cross country and track as a high school kid, and ran in college and after college. I ran the Shamrock Shuffle in 1988, and I hadn’t run it in almost 30 years.  The Shuffle, what I like about it is it’s that right of spring; nobody knows what the weather will be, and it’s a little more relaxed than the marathon.

Yes. We have had some different variations and think about a lot of things. Although you may think the world stops on Marathon Sunday, its taking in effect, especially with the crowds, how it all works if there is an emergency and access to the hospitals. It’s a balancing act and it all works now. The west loop and south side of the course have really transformed, and we want to showcase the neighborhoods that are on the rise. One of our initiatives this year is to engage more residents and crowds on the course on the west side.

Some I become very close to, especially the former champions. I try to spend some time with them, but I also like to give them a bit of distance. I make myself accessible, but it’s about a competition and they’re very competitive. If I run into Galen Rupp in Boston and we can hangout, that’s great, but around competition time it’s different. I can say out of all of the athletes, as magnificent as they are as athletes, they are equally magnificent as individuals.

One piece of advice I’ve given is there’s such an energy between the crowds and entertainment, you have to be conservative in the beginning, especially the first year. You can keep up with the adrenaline and enthusiasm, but you want to enjoy the last three miles too by passing people and not being passed.

I’m ironically very calm the last couple of days. It’s back to all of that planning; we work really hard leading up to the event, making sure our teams have the logistics in place. Weather is always the first thing you’re aware of. Security too, and that’s where our partnerships are so valuable. It’s very a well-planned and implemented event.

I think it’s the spirit of the city – we’re in the heart of the Midwest. It’s a wonderful place to work and live, but also a great place to visit. It’s a great sporting town, and people are intrigued by the marathon. The course is great, the accessibility and convenience is all great, but the city is so unique and diverse and I think that’s what brings people back.