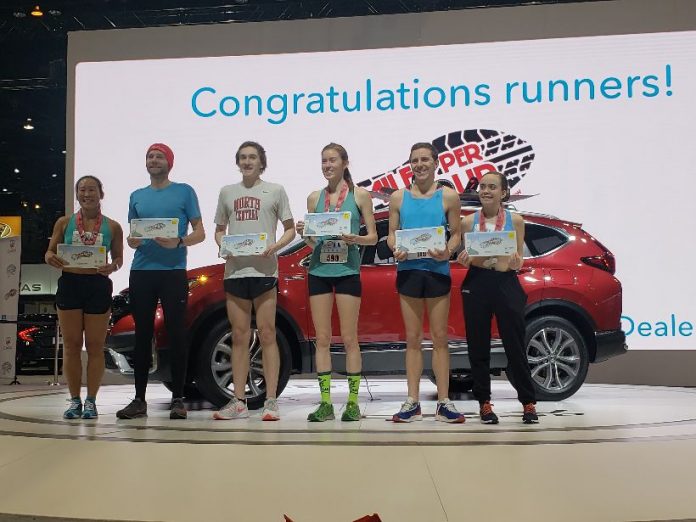 February 16, 2020, kicked off the CARA Honda Miles Per Hour run, which was a race within the McCormick Place through the Chicago Auto Show. For those that aren’t thrilled about running out in the cold, this race provided an option to run inside, not on the usual oval-shaped track, but rather an intricate layout of 2.4 miles throughout the Lakeside Center and North & South Buildings of the McCormick Place, connected by the Grand Concourse. The uniqueness of this race was the opportunity for runners to see how many miles one can run in one hour. 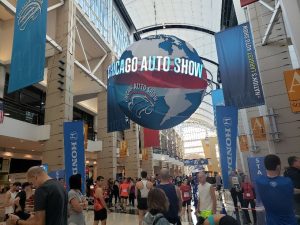 The start of the race was set in the Grand Concourse, so upon arrival it was rather easy to get situated. Adjacent to the concourse were the North & South Buildings and to the north was the easily accessible gear check and day-of packet pickup. As people prepared for the race, there was a mix of photo opportunities under the auto show decor, as well as pleasant comradery among volunteers, runners, and spectators.

This run had one coral with everyone starting at the same time. With just over 500 participants, the start was actually pretty spacious allowing for everyone to warm up and get ready. Just after the national anthem, at 8am, the horn blew to start. The run proceeded up the concourse, so yes we had hills. The route included an intricate series of turns looping within the Lakeside Center, which was pretty cool to see runners along the route. The mile markers were clearly laid out. 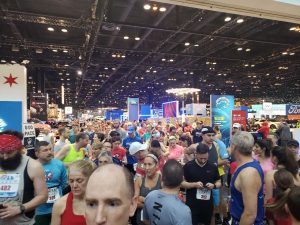 Upon clearing the loops of the Lakeside Center, the route led back up the carpeted hill to the Grand Concourse and into the North Building where runners looped through cars and exhibits. The water stations provided hydration since the air in the building was a little dry. Once through the North building, runners crossed over to the South Building to the other side of the auto show. Spectators, auto show exhibitors and race volunteers cheered and assisted runners throughout the route.

Once runners exited the South Building they were back at the start, and it was on to complete the route again seeing how many one can do in the remaining time. Around cars and bends, through sunlit concourse overlooking Lake Shore Drive, and among cheerful onlookers, this race had the best! There was a nice mix of runners of all ages, ethnicities, and experiences, but most importantly the run was safe, warm and fun! Upon the nearing of the hour, runners got a 10-second countdown to completion. After which, there were photos and various congratulations shared among the participants, volunteers, and families.

Being the 1st time for this event, there were comments afterwards that people enjoyed it enough to hope it is put on again next year. With each race registration, runners also received complimentary entry into the auto show, which opened at 10am to the public. With a 9am race end time, runners had early access to check out the showcase of cars and exhibits. Upon entry (right next to the gear check and finish), runners received their post-race bag and finishers medal. The shoe-shaped emblem with the race logo was the swag for all the runners upon completion. 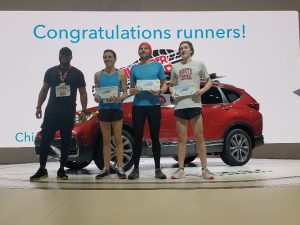 The post-race awards ceremony, acknowledged the top male and female finishers and included a photo op with all six. All participants received an email with the preliminary results the next day and currently are awaiting the final results with age group, gender and team rankings. My one concern is that upon review of the preliminary result, it appears they may be slightly off. Personally, I completed just over 3 loops, which compared to not just my Garmin at 7.28 miles, but also if the course is 2.4 miles, that would put my mileage at 7.2 miles (2.4 x 3), however, the preliminary results indicate my run at 6.98 miles.

Overall, it was a fun run, well-organized, and a great way to race despite the cold of February in the city of Chicago, especially among a plethora of weekend events. With the tie to the annual auto show being a great highlight, I’d recommend and run this race again!