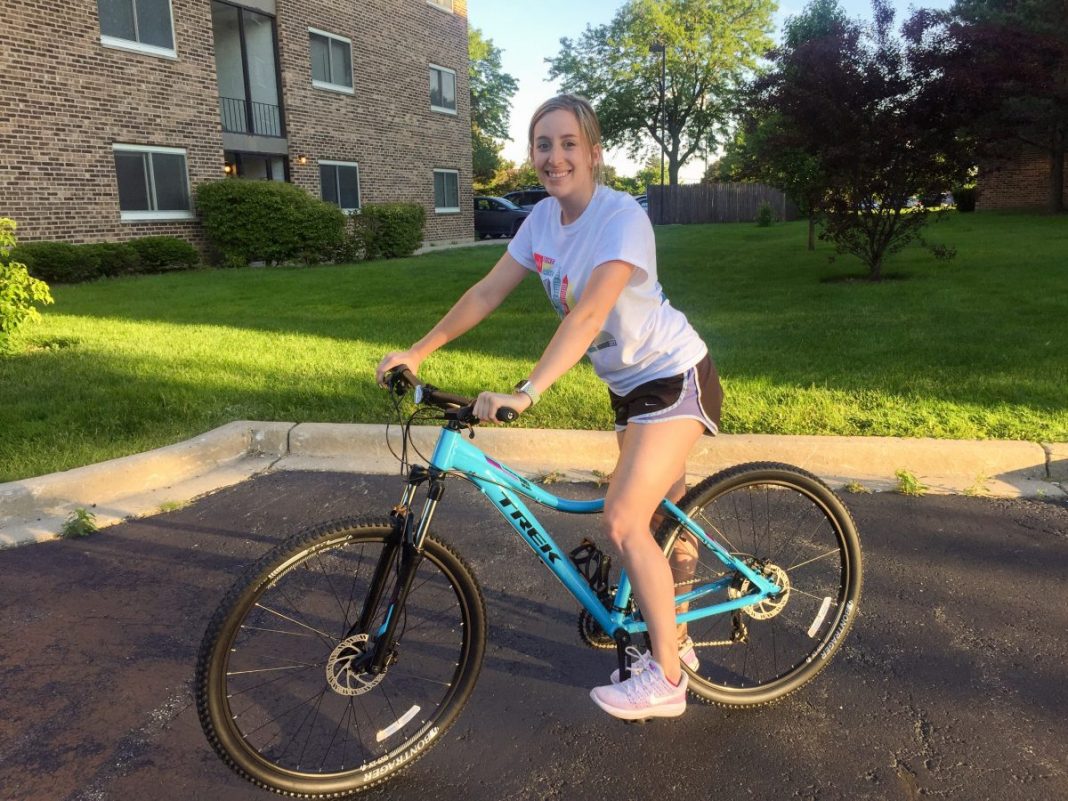 In college, I had a decent Diamondback road bike that I used all the time to ride to and from class and around campus. I got it in high school, and while I didn’t know much about bikes, it was perfect for me.

Then it got stolen.

Since then, I’ve been bike-less. I never really knew what I wanted, nor did I have a reason to spend hundreds of dollars on something I wasn’t sure I’d really need now that I was out of school. When my boyfriend Dan got a bike in the fall, I was envious, but still didn’t think it was a necessity for me.

When I did a Lifetime Indoor Tri back in January, I was surprised how much I enjoyed it. Not only did I like the format, but I really enjoyed doing a race that wasn’t strictly running; obviously, I love to run, and that’s what I do for exercise a majority of the time, but I then started thinking about other options.

Once it got nice out in March, going for a bike ride kept crossing my mind. Seeing Dan take his bike out here and there continuously increased my desire, especially as I ran alongside him (which is not fun, by the way, because you feel like you’re running at snail speed.) Then, one day I borrowed my mom’s bike and my dad and I went for a 16-mile bike ride on different paths around Hoffman Estates, and I knew I needed one.

The problem was, I didn’t know what I wanted. Dan got a mountain bike with 29-inch wheels, which seemed unnecessarily large for me; he encouraged me to get something similar so we could go to different trails and off-roading, but that didn’t seem like my scene. Also, we just moved close to a forest preserve, so I thought getting a road bike would be more practical. After doing some research online, I decided I had to try some out.

As far as the brand, I wasn’t picky. I just wanted something nice that would last awhile, and honestly, that was a pretty color. One night I dragged Dan to our local bike shop and asked him to help me decide what I want. To my surprise, he is very knowledgeable about bikes, and was a huge help.

We went over to the female bikes and I saw the road bikes and the mountain bikes. After about 20 minutes of going back and forth, I asked a female worker what her opinion was; she said that she has both types, but while a road bike will go faster in the forest preserve, a mountain bike is a little more versatile if I ever do want to ride on more intense trails. I’m glad I asked, because I thought the opposite.

So she set me up with two bikes: the Trek Skye women’s mountain bike and the Trek Neko which is more of a hybrid. Before I even hopped on, I was already leaning towards the Neko, because it seemed more my style, plus, the Skye had those 29-inch wheels, which looked like monster truck tires on a female bike.

I hopped on the Neko first, and it was smooth, comfortable and lightweight. Until I hopped on the Skye, I thought it would be a perfect fit for me. The Skye, however, had all of the same qualities as the Neko that I liked, but somehow gave me more of a feeling of control; going up and down curbs was way easier than my Diamondback ever was, it seemed even smoothers, and I just felt overall more confident. To Dan’s surprise, I said, “I want a mountain bike.”

However, I didn’t make the purchase that night. I wanted to look around a little more, and make sure it was what I wanted to spend my money on.

I again borrowed my mom’s bike for Bike the Drive this past Sunday (which was a blast), and even though it was too small for me and my butt hurt a lot, my mind was made up. I was getting a bike this week.

With the help of one of my coworkers and George Garner Cyclery in Northbrook, I decided to stick with what I know and got a Trek Women’s Skye SL. Originally, I was hoping to get the size with the 27.5-inch wheels, but because of my height (5’8”), I was sized with the 18.5-inch frame, which only came with 29ers. When I saw it the second time though, they didn’t seem as big.

Plus, this bike came in a sky blue color with purple accents – so cute, right?

I added a water bottle holder and was quickly out the door, eager to take my new baby home and ride her around.

After just two days, I’m wondering how I went this long without a bike while working at Chicago Athlete. There’s so many cool events and products to try, I feel like my options as an athlete have instantly multiplied. While a triathlon may not be in my current race schedule this season, stranger things have happened…