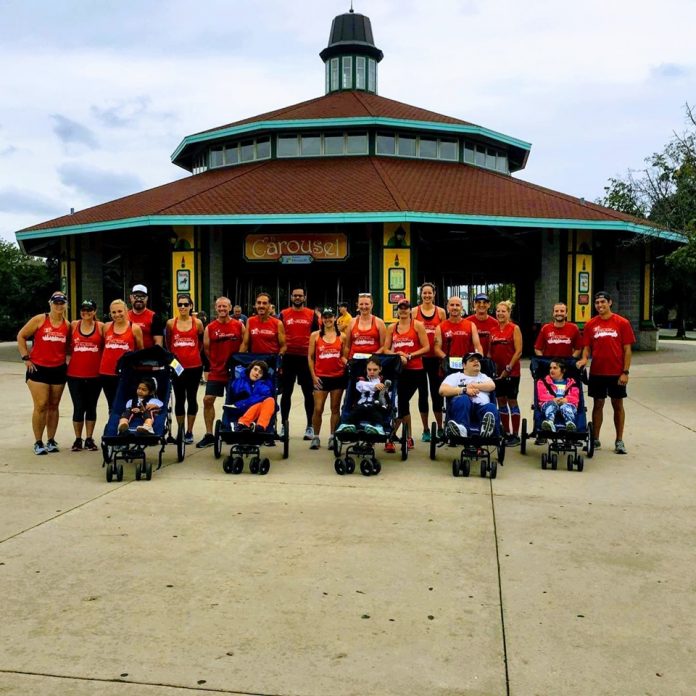 This weekend, I had the honor of keeping my normal racing apparel and shoes at home and donning the teeshirt of MyTeam Triumph at the Brookfield Zoo RunRun 5k.

Myself and about a dozen of my Fast Track Racing Team teammates, plus a few others, volunteered to serve as Angels for the charity team. We had the opportunity to do this last year too and had a blast, so we were pretty psyched to do be able to do it again.

MyTeam Triumph (MTT) is an organization created for disabled teens, adults, and veterans who might not otherwise be able to participate in endurance events, who are team Captains. MTT brings out three to six Captains to be pushed by a group of three to four Angel volunteers through the course, switching off pushing duties as they go. (Very important to switch off as pushing is not as easy as it may seem.) A few of the Captains were the same ones we had met the previous year, so before the race, we were able to have a mini-reunion, sharing stories about what has happened in the last year and stuff like that. The energy and enthusiasm of all the Captains gets transferred right to their Angels and a typical race morning becomes that much more fun and enjoyable.

The race itself winds through the grounds of the Brookfield Zoo, passing by almost all of the animal habitats. It is a great event for families and there were plenty of kids around trying to tackle the 5k distance. (There was also a youth mile later on, for those not wanting to run as far.) The course itself has a lot of quick turns and small inclines, which can make for an interesting and dizzying race at times, but also makes for great spectating for family members. The race organizers are great about spacing runners out in waves so that the course doesn’t get too crowded, which is much appreciated, especially with a couple of narrow spots by some of the exhibits.

We did have to fight a little bit of rain just as the race started, but shortly after it ended, the rain stopped and all the runners were free to roam around the zoo for the rest of the day with the family and friends. I highly recommend planning to spend a full day at the zoo after the race, especially since the runners are able to get in and walk around a little bit before it normally opens up to the public, creating a nice, quiet zoo morning where you can get a great look at some of the outside exhibits.

A typical, enjoyable morning race, for me, was made all that more wonderful by running with MTT. Volunteering to run with this group is the perfect start to a great day with friends. I am looking forward to my next race with them at the Chicago Half Marathon in a couple of weeks. If you’d like to see more info on MyTeam Triumph and the races they’ll be at this year, the Illinois Chapter’s website is www.myteamtriumph-il.org.