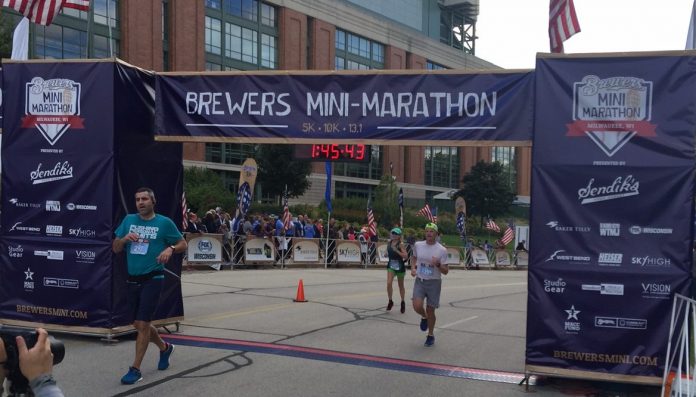 On Saturday, the Milwaukee Brewers hosted its annual Mini-Marathon featuring a half marathon, 10K and 5K race, which began at Miller Park, the Brewers’ home field.

As I pulled up to the stadium, I saw something I’ve never seen before… A parking lot at a baseball stadium! Born and raised a Chicago Cub fan, I’ve spent countless hours either riding public transportation to get to Wrigley Field or looking for parking to spend a fortune on.

It was a breeze to park in the plentiful Miller Park lots, even with over 1000 runners participating in the various race distances. The staggered start times and assigned corrals helped to ensure that racers had enough space on the course.

The race began rough, as the emcee announced the recent victory of the Milwaukee Brewers over the Chicago Cubs…a cringe-worthy moment for a Cub fan like me, especially surrounded by nearly 1,000 cheering Brewer fans as we waited for the half to begin.

The course was a loop that toured several landmarks throughout Milwaukee and ended with a circle around the field warning track at Miller Park. Racers enjoyed scenic diversity, running past bars, ice cream shops, homes and even over bridges.

With my guilt raising every step of the way, I quickly realized that I loved the scenery and energy of this race. Brewers paraphernalia and brew city spirit were evident it in the volunteers, race spectators and runners alike. Around mile nine, I began to question my alliance to the good old Cubbies, but quickly chalked that up to my fatigued body and mind!

Just before crossing the finish line, racers entered Miller Park and had the opportunity to race around the field warning track, complete with a cheering audience and the stands and a feature on the jumbo Tron. Still a Chicago Cubs fan to the core, I must admit that this race was fun and watching myself on the big screen overlooking the baseball diamond was a great experience.

The race, presented by Sendik’s and benefitting the MACC Fund was incredibly well done, with water and aid stations located throughout the course and police blocking all busy intersections. The variety in both scenery and elevation kept the race exciting. Finishers received a large medal with a baseball and the Brewers logo, a short sleeved, gender specific, technical t-shirt and a ticket to attend a 2018 Brewers game.