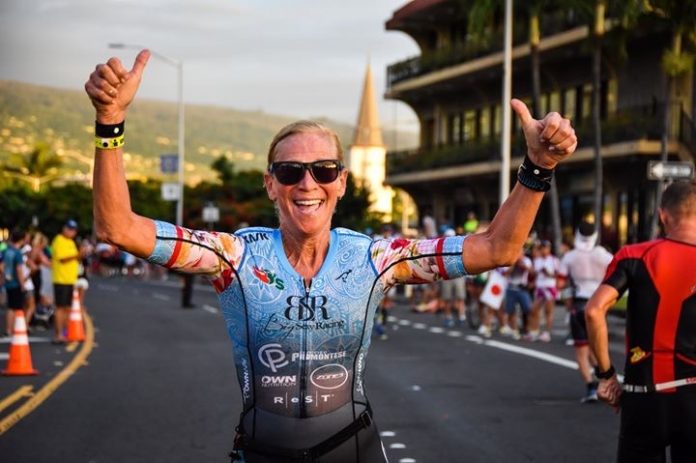 At 73 years young, Bobbe Greenberg is doing the impossible: She’s getting faster. For the second straight year, the Highland Park resident won the women’s 70-74 age-group at the Ironman World Championship in Kailua-Kona, Hawaii, and she did so by knocking 22 minutes off her time from a year ago.

Greenberg’s secret to unlocking the fountain of youth may be her coach: herself. While most athletes competing in Hawaii stick to strict training plans that have been carefully planned months in advance, Greenberg has learned to listen to her body and saves the really hard stuff for race day.

“You always hear people say ‘don’t burn your matches,’ as if you have to hold back during Ironman,” she says. “I’ve learned that I don’t have to hold back. I guess my body holds me back. It allows me to only go so hard that I don’t blow up. I don’t know how else to explain it. I’m able to push myself as hard as my body will let me.”

Greenberg grew up on Chicago’s north side and was part of the first class at Mather High School. That was well before Title IX, so playing competitive sports as a teen wasn’t really an option. She became a cheerleader, because she says, “If you were peppy and a girl, that was your sport.”

While she’s always been a self-proclaimed competitive person, competitive sports didn’t become part of her life for a few more decades. She got married, moved to the northern ‘burbs, had two daughters (and now four grandkids) and dabbled in things like tennis and skiing, but the thought of doing a race of any kind never crossed her mind. She even coached cross-country during the nearly 50 years she spent as a middle school English teacher, but running long distances was never really her thing.

Then, one day in her late-50s, she caught a glimpse of herself in a storefront window. “I realized my posture was appalling, so I joined a gym that day.”

You could say her posture has improved since then. It was the early 2000s, and spinning was all the rage, so she became a regular at spin class. One day the instructor announced that the gym would be hosting an indoor triathlon and encouraged the whole class to sign up. There was just one problem: she didn’t know how to swim. “The pool was only waist deep, so I figured I’d just run back and forth,” she says.

She managed to learn how to swim—sort of—before that first indoor race and even won her age-group (over two other women). Her competitive nature finally had the perfect outlet and she was hooked. She went looking for a “real” triathlon and stumbled upon the Naperville Women’s Triathlon (RIP). “I barely slept for weeks before the race because I was so excited to do a real race.”

After the sprint tri in Naperville, she signed up for the Olympic distance at the Chicago Triathlon later that summer, even though the idea of swimming a mile in Lake Michigan seemed impossible. One year later it was a half-Ironman in Racine (also RIP) and the following September she found herself wading in Lake Monona at the start of her first Ironman in Madison, Wisconsin.

Each time she stepped up in distance, she had never done a swim of that length prior to race day. “There was always this ‘what if?’ thought—like I didn’t really know if I could swim that long each time,” she says.

It turns out she can swim 2.4 miles—albeit not that fast—and she has no problem catching her cohorts over the final 138.2 miles of an Ironman. After the finish of her first race in Madison, while she sat with her daughters rehashing the events of the day, her son-in-law went to check the results to see where Greenberg had finished. He returned with terrifying news: She’d won her age-group and had qualified for the world championship in Hawaii.

“I was like ‘oh no!’ And my daughters said that I didn’t have to do it just because I’d qualified,” she says. “I debated about doing it for a long time because I didn’t know much about the race in Kona and I was worried about how much of a time commitment it would be.”

Kona proved too good of an opportunity to pass up. She competed in her first Ironman World Championship in 2011, and the swim took her two seconds shy of two hours. She ended up finishing with just more than a half hour to spare before the midnight cutoff. She was 12th out of 13 finishers in the 65-69 age-group.

She’s been back to Kona six times since and has shaved more than two hours off her time to become a two-time world champion of the 70-74 age-group. Last year there were 12 other women in her age-group; this year there were only six. Each time she has overcome a deficit of 20-30 minutes at the start of the marathon. This year’s finishing time of 14:07:11—on a very windy day—was her fastest yet in Hawaii, and her 4:59:36 marathon split marks the first time a woman in the 70-74 age-group has run under five hours.

Greenberg has no plans to slow down. In true Chicago form, she intends on returning to Kona in 2020 to go for the three-peat. But she’s already looking ahead to 2021 to achieve her biggest goal: She’d like to join the Sister Madona Buder and Harriet Anderson as the only women to ever finish the Ironman World Championship in the 75-79 age-group.

“Just for that reason I’d like to do it,” she says. “And because I feel great and I feel like I could do it. So why not?”