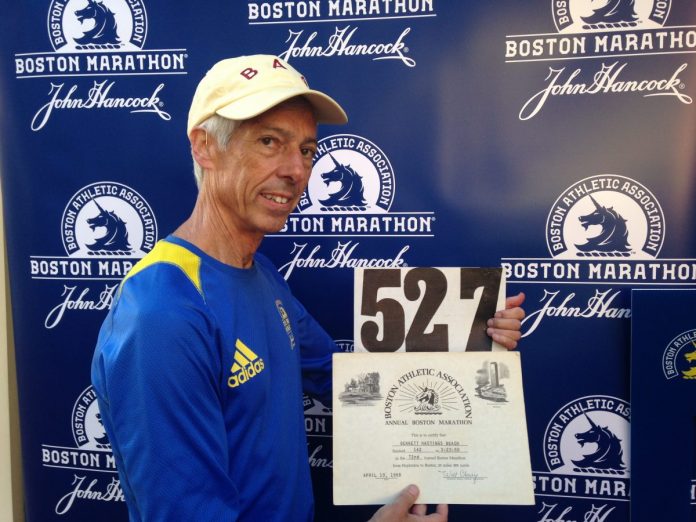 On April 17, Ben Beach, 67, will be racing his 50th consecutive Boston Marathon, and will become the first athlete to ever run 50 straight years at the same marathon.

“I’m excited about it and grateful to all those who have helped me keep the streak going,” Beach says. “I just take it one year at a time, planning to run as long as I can.”

Beach has been running for 52 years; throughout those years, he has finished 77 marathons, and has a personal best of 2:26:29 in the 1981 New York City Marathon.

As a teenager in the mid 1960’s, Beach realized that sports such as football, baseball and basketball were not his forte, due to being only 5’2”. While this was disappointing at first, Beach realized he was built to be a marathoner.

His first marathon was the 1968 Boston Marathon, when qualifying times were not required. He remembers it being very hot, because the start time was at noon, but came in with an impressive time of 3:23:50.

“My clearest memory is the thrill of approaching the finish line and hearing my name announced,” Beach recalls. “It is a unique, point-to-point course with a long and distinguished history. e spectators are so enthusiastic and knowledgeable, and the volunteers are outstanding.”

However, the ride hasn’t been a total breeze for Beach; he has been running with the condition dystonia for several years, which involves involuntary muscle contractions. Although it’s slowed him down from his sub 2:30 times, he has never let it stop him.

“I wish someone would nd a cure for dystonia so I could regain my stride and run a decent time,” Beach adds. “But I’m lucky nothing has ever knocked me out. I’m also fortunate to have a wife and kids who have put up with my marathon training without complaint and have enthusiastically supported the streak.”