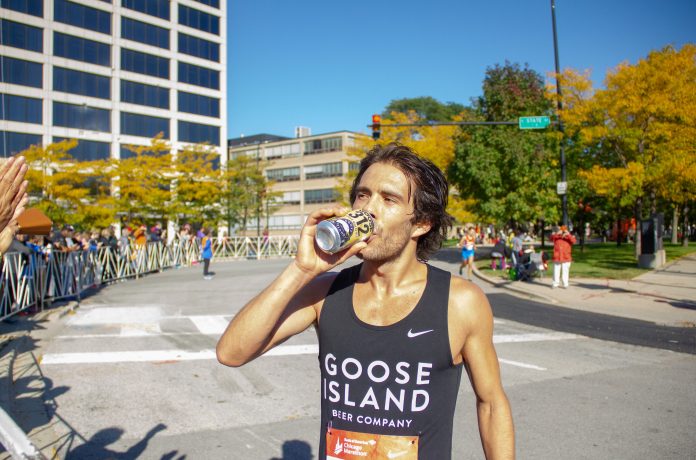 You may recognize Tim Faith as the guy sporting Goose Island attire at local races. As a brewer for the company, this marathoner (who got a 2:44:48 at the 2016 Bank of America Chicago Marathon, we might add) finds himself in the perfect industry for a talented athlete.

I started running in high school as training for football, but then I quit and did cross country shortly after. I ran through high school and focused on the 400 and 800 in track. Then in college, I did more 1600’s until my senior year where I tried every event to see what they were like. I haven’t stopped running since then, and have actually set all my PRs after college.

I was injured going into my junior year of college because I was experimenting with long-distance running for the first time. Having all that extra time, I realized I was a boring person and needed a hobby. I was premed at the time, and a friend from school started home brewing, which I was interested in because of the sciences behind it. So that summer, I started home brewing. Then I did a medical internship that fall and winter in Australia, where I spent my life savings on beer. When I came back, I switched my major to microbiology to increase my chances of getting into the industry. In my last term of senior year, I worked with a professor to design a capstone project to work at a brewery, learning about preserving and purifying yeast. They hired me after.

Working at Goose Island is great because they cater to individuals and their hobbies; it’s a very urban, athletic-oriented environment. I run to and/or from work every day. Plus, Goose Island is a sponsor of the Chicago Marathon, so if they pay for a bib, I wear their gear. I’m doing a lot more traveling right now, and it’s a challenge but ultimately just finding balance between beer, training and travel.

About 10 people here run on a consistent basis. We run together on Wednesdays from work, then hang out in the tap room after for a couple beers. We do a lot of collaborations too. We’re currently collaborating with DWRunning, as they do runs from here, and then we provide employees training plans. They also do three team parties every year and we provide the beer.  I’m on the team now I’m the fastest I’ve ever been.

I have done the beer mile twice. My second one was in November when I was in Brazil. I was not in as good shape as I was my first one, so when I got the last exchange zone, I started chugging my fourth beer and well, it came up. You have to train your stomach for that, which I hadn’t done since my last beer mile and I don’t have the same tolerance. I prefer the more bar crawl/running crawls, like a 12 mile run while stopping at different breweries along the way.

I tend to shoot for lower ABV under 5 percent, 312 is a great one. I prefer a lot of the milder beers that don’t upset your stomach.