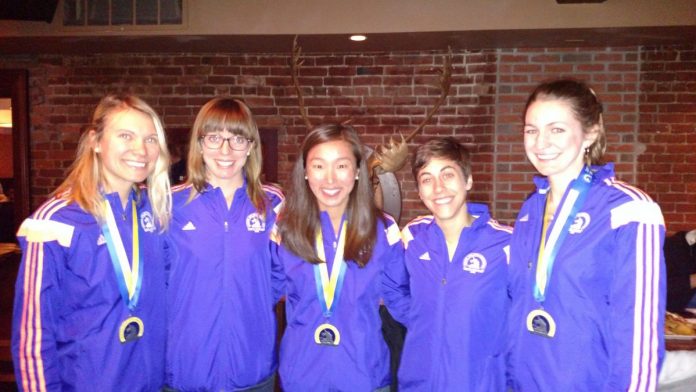 Amid rain, wind and cool temperatures, 26,610 runners crossed the finish line of the 119th Boston Marathon on Monday, including 894 from Illinois. Despite tough weather conditions, several area runners made the most of the experience.

“It was phenomenal,” Taylor Feehley of Chicago says. “The conditions weren’t ideal, but the race went as well as I could have hoped in those conditions.”

Runners battled a headwind and consistent rainfall for most of the day. Those elements combined with temperatures in the 40s made for fairly chilly conditions, especially in late stages of the race for Chicagoan Kati Petry.

“With all the rain, my hands got really cold and it was hard to open my fuel and grab cups of water towards the tail end of the race after being outside for so long,” Petry, who logged her fastest time at Boston and second fastest marathon overall on Monday, says.

While runners had the advantage of moving to keep them relatively comfortable, the weather made spectating particularly colder than in recent years.

“I definitely think it was easier to run in that weather than spectate, so I give props to all the spectators who stayed out there for so long,” Rachael Stack of Chicago says. “I wouldn’t have wanted to sit and stand in the cold rain. It’s much easier to run in it than stand in it, I think.”

For Jennifer Plaskota of Chicago, the conditions inspired a sense of togetherness and unity.

“The whole atmosphere in general was still really positive, and even despite the weather, I felt like it was really empowering to realize that everyone was in it together: all of the runners, spectators and volunteers,” Plaskota says. “I was really impressed with the amount of spectators that were still out there even though it seemed like it was pouring for the whole day.”

Multiple area runners commented on the support of the entire city throughout the weekend. Patrick Cogan, director of accounts management and corporate partnership at the Chicago Area Runners Association, ran his first Boston Marathon on Monday and compared the support to that he’s experienced running the Bank of America Chicago Marathon in the past.

“Chicago has great support, and Boston is the same thing,” Cogan says. “It’s really an entire event that day. It’s kind of the highlight to run in that and to even be a fan and cheer on the race from the sidelines. It’s just amazing to see how many people are out.”

Julia Montag, community manager for BibRave, stayed in Boston to Tuesday and commented on the change in the city between the weekend of the marathon and after the race.

“It was crazy to see the difference of the city from last Friday until the morning of Tuesday and how it goes back to being a normal city,” Montag says. “Being able to city Boston as a functioning city and compared to how it gets excited for the marathon was incredible.”

The difference in terrain between Chicago and Boston can present a unique challenge to local runners, but those who participated in local training programs felt well prepared to tackle Boston’s rolling course.

“I trained with Jenny Spangler [through CARA], so we did a lot of training in Barrington,” Scott Pomerich of Lake Bluff says. “I was able to find something that showed the topography, so I made sure every mile I ran based on the hill in front of me. If it was hilly or an upgrade, I knew it’d be a slower mile. If it was a downhill, I knew it should be a faster mile. … [Knowing that] made such a difference when you’ve never run the course before.

Petry, Stack, Plaskota, Feehley and Montag all trained with Fleet Feet Sports Chicago’s Boston365 program, which also brought its runners out to Barrington to prepare them for the race.

“The hills were not nearly as terrifying as I thought they were going to be,” Feehley says. “It was definitely challenging but I felt well prepared. I have to credit [Fleet Feet’s Boston365] training program for that.”

Complete results from the Boston Marathon are available on www.baa.org.