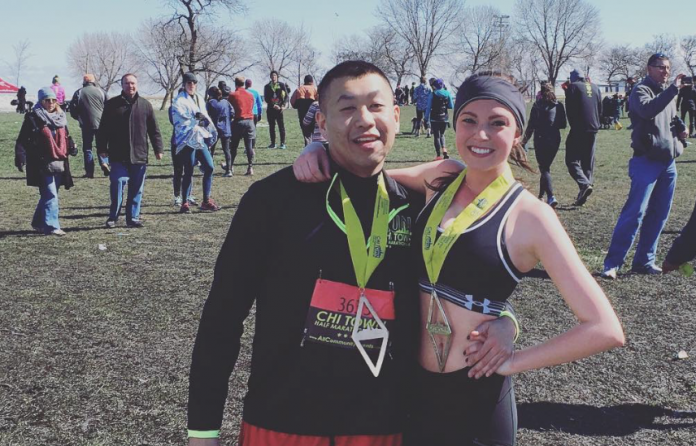 This October will be Alisa Corrado’s first marathon of her running career. Two years ago, she was training for the Bank of America Chicago Marathon, and just one week before race day developed IT band syndrome that prohibited her from running the race. In 2019, she’s back and ready to conquer the 26.2 miles.

Corrado grew up as a swimmer specializing in the backstroke. During high school she played golf and lacrosse. In college she ran during her free time but wasn’t on any official teams.

During freshman year at the University of Southern California, Corrado joined an outdoor early morning boot camp in the park. She always found the one mile run the most challenging part, so she decided to start running outside of camp to make herself more competitive. Soon enough, she ditched the boot camp and started running full time.

“My most memorable run was my very first race. It was a 10k while I was in college in Laguna Beach, Califorina,” Corrado reminices. “It was a Halloween themed 10k, and I ran as Sullie from Monster’s Inc. The hills were certainly challenging, but I’ve never seen such a beautiful running path!”

After Corrado graduated college, she was an EMT for a year before enrolling in medical school and working the night shift. She continued running in the mornings with long runs on lakefront.

“My old EMT partner Harry influenced my running career the most. We bonded over running while we would run calls to hospital in the middle of the night. We ran our first half marathon together in 2016, and continue to enjoy our Saturday morning runs together.” Corrado adds. “Some runs I push him and other runs he pushes me, but Harry has always been my biggest running support system.”

is extremely demanding, especially trying to get in her weekly Saturday long runs. Luckily, Corrado was able to create her fourth year of medical school schedule with flexibility and online electives this fall so that she can dedicate some more time to training.

There has been some key difference in Corrado training this year compared to her first marathon attempt. In 2017, she ran seven days a week and started training for an October marathon in May. She pushed herself to run multiple, back-to-back, 20 milers at 8:20 pace and would come home so exhausted that she would be out the rest of the day.

This year, she is running smarter by following a customized training program and taking some more time for herself. Corrado is on track to run a 10:30 mile on race day.

“Even though I am much slower than 2017, I find that I enjoythe runs so much more!” she says.  “I am now only running about four days a week, and incorporating other exercises like spin class, long stretching sessions and dance classes. I may not be going as fast as I used to, but the runs are so much more enjoyable.”

Corrado’s goal for the 2019 Bank of America Chicago Marathon is to finish her first marathon without walking and then celebrating with her friends and family.

“I am dedicating this marathon to my grandma, Lorraine! When I first started running, I would always run from my home to her house in Lakeview to say hi,” Corrado says. “She was my very first long run in Chicago, and I miss her every day. I know that she will be with me in spirit on race day.”