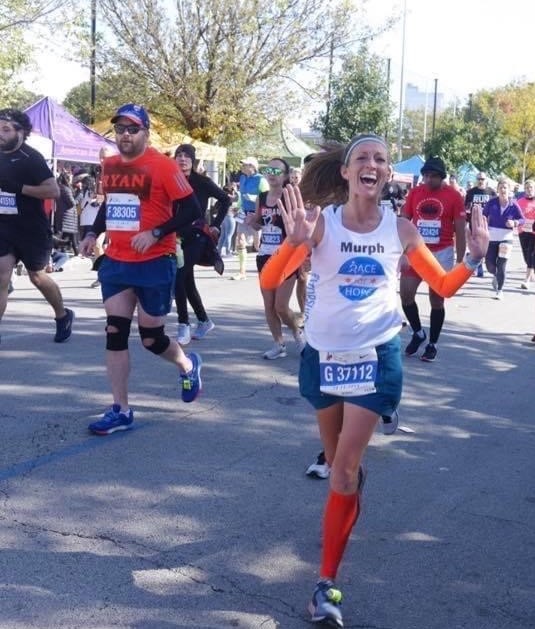 The Bank of America Chicago Marathon is returning on October 10, 2021, with 35,000 runners ready to make their way through 29 iconic Windy City neighborhoods. Runners will have acquired their bibs in a variety of ways, including time qualification, lottery, and legacy entries earned through previous Chicago Marathon and Shamrock Shuffle finishes.

Thousands of runners will also obtain entry by fundraising for a charity team. Fundraising requirements will vary from charity to charity, but the minimum is $1250 if the entry is claimed during the application window, and $1750 if claimed after the deadline. Charity runners have donated over $234 million to various organizations since the program’s inception in 2002.

The inspirational reasons to run for a charitable cause will vary as much as the motivational factors that make people want to train for months and then lace up their shoes for 26.2 miles on a weekend morning.

For Stacy DeMarsh of Crystal Lake, her running journey began in college with 5K’s, progressed to a half marathon after graduation, and then the desire to challenge herself with the longer distance drove her to attempt the full marathon. 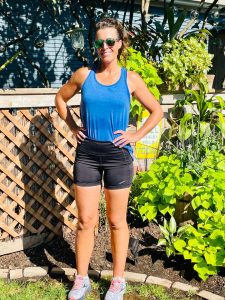 This coming Chicago Marathon will be her third time running Chicago and her fifth marathon overall. “I have FOMO every year I skip running the Chicago marathon. The energy and the amount of crowd support is unreal! And there’s nothing better than that “finish line feeling.”

For Stacy, the motivation to pay her love of running forward has inspired her charity of choice this year and she will be running on behalf of Girls on the Run (https://www.girlsontherun.org/) for the first time. As a GOTR coach, she embodies the organization’s mission to inspire girls to be joyful, healthy, and confident using a fun, experience-based curriculum which creatively integrates running.

For other runners, their experience watching loved ones struggling with chronic ailments has instilled within them a responsibility to raise money to try to the lessen suffering for others. This is why Kim Marie Macygin of Algonquin is running the Chicago Marathon this year and raising money for the Respiratory Health Association (https://resphealth.org). Their mission is to prevent lung disease, promote clean air, and help people live better through education, research, and policy change. 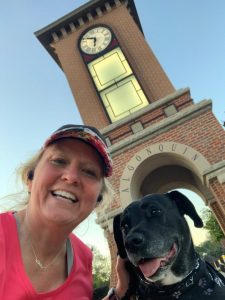 Kim Marie’s mother, Judi, was diagnosed with COPD in her thirties and declined rapidly. After a series of failed treatments, she found herself in need of a lung transplant. After a three year wait on the transplant list, Judi’s procedure was performed. Kim Marie watched her mom go from not being able to walk across the room to attending water aerobics three times per week!

Inspired by Judi’s post-op progress, Kim Marie began raising money for respiratory research. It started with the Hancock Hustle 19 years ago and has evolved into multiple endurance running and triathlon events over the years.

Sadly, Judi passed away 17 years ago, and the effects of respiratory illness continue to afflict others in Kim Marie’s life. Her friend Rebecca, who she lovingly refers to as “Reebs” is currently fighting her own battle after cold symptoms turned out to be more serious than expected. Kim Marie met Reebs through the Respiratory Health Association, where Reebs worked before she walked into a doctor’s office thinking she had a cold and walked out with a lung cancer diagnosis. Kim Marie also runs for Mickey, who just finished her last lung cancer treatment and has an excellent prognosis.

Kim Marie runs for Judi, Reebs, Mickey, and everyone else suffering from chronic lung illness. She doesn’t do it alone though. Her lab/boxer mix, Maggie, shares many of the miles, and presses Kim Marie to get moving on the mornings she wants to stay in bed. Motivation doesn’t seem to be in short supply however, as she will raise $2500 for the RHA this year and has raised over $20,000 in total.

And in a last statement of modesty, her marathon celebration plans are very clear.

“It’s my sixth marathon,” she laughed. “I’m just trying to figure out how to get to the Orange Line after the race to get to my brother’s house on the South side.”

Kim Marie lived through years of her mother’s health struggles. For other people, that struggle is much more invisible to those around them. And then, in a single tragic moment, the pain experienced by a loved one is made evident to everyone.

Tessa Burke of Chicago talks about connecting with your “why” when it comes to marathon training, explaining, “for mental stamina, it helps to connect with your ‘why’ because you’re more likely to endure some discomfort if it’s tied to meaningful purpose.” 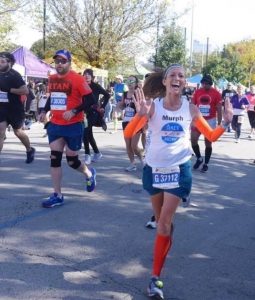 For Tessa, the story of her why began over ten years ago when she lost her brother, Connor to suicide. Tessa describes Connor as a kind and adventurous soul. “When he died the world lost a really passionate artist, host, coach and teacher, and I lost one of the people that I loved most in the world.”

After she lost Connor, Tessa turned to the American Foundation for Suicide Prevention (https://afsp.org/chapter/illinois) to help deal with her traumatic loss and turn her grief into hope.

The mission of the American Foundation for Suicide Prevention (AFSP) is to give those affected by suicide a nationwide community empowered by research, education, and advocacy to take action against this leading cause of death.

This coming Chicago Marathon will be the fourth time Tessa has run the race to raise money for the AFSP. Tessa considered not running this year, questioning if she had another marathon in her after an exhausting 2020.

“In the end,” she explained, “I am fueled not just by the fundraising itself, but much more so by the conversations and exchanges about mental health that my fundraising allows me to have with friends, acquaintances, and even strangers. This is not about running a marathon. It’s about reducing the stigma surrounding mental health and supporting research and programs for suicide prevention.”

Tessa has raised over $3000 this year and will continue to run and fundraise for everyone else affected by suicide, and for all those who struggle in silence.

Stacy, Kim Marie, Tessa – these are just three of the roughly 10,000 runners per year who run on a charity entry in the Chicago Marathon. This equates to thousands of stories of inspiration, pain, victories, and losses. Their marathon day may consist of a few hours of pavement pounding, but their behind-the-scenes efforts to raise money and awareness for their various causes, while logging the training miles needed to successfully complete their 26.2-mile day should inspire all of us, whether we’ve qualified via time, lottery, or legacy attainment.