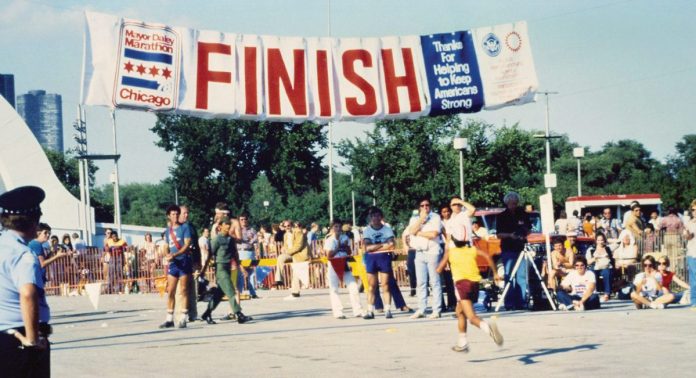 Every October, runners from around the world flock to Chicago to run the renowned Bank of America Chicago Marathon; beginning in 1977 as a race that any runner could enjoy, the city of Chicago has built upon the initial strong foundation to create an event that keeps people coming back year after year.

In the last 39 years, the race has evolved with the running community; participation continues to increase, sponsors have been changed, and the course has had its fair share of adjustments as well. But one thing remains the same: The Bank of America Chicago Marathon is a “world-class marathon event,” current race director Carey Pinkowski says, and always will be.

THE FIRST START LINE
Originally titled the Mayor Daley Marathon after the Chicago Mayor, the first ever Chicago Marathon took place on Sept. 25, 1977 at 8 a.m. In order to compete, runners had to pay a mere $5 entry fee.

Wendy Miller, the first race director, was a major asset in putting together the city’s  first marathon; he remembers sitting at a meeting with the Midwest Masters, a 40 and over running group, and discussing the potential of creating a 26.2-mile race through the streets of Chicago.

“We were all interested, but we didn’t have any access to money,” says Miller, who was a partner in a financial advising firm at the time. “We didn’t get any sponsors, but one of my friends who had run a lot of marathons with me, Lee Flaherty, underwrote the marathon for us.”

But finding someone to cover the costs was just the beginning; Miller, along with the other four founders, Bill Robinson, Sharon Miller, Dr. Noel Nequin and Wayne Goeldner, had to do all of the legwork. First, they were in charge of finding volunteers, in which York Cross Country Coach Joe Newton brought his team to be the main marshals, and two ladies were hired to write down all the finishers and their times, by hand, at the finish line. Miller and his team also had to order the water and sports drinks for the aid stations, which he remembers being a big struggle because they didn’t know how much to get, as none of them had organized a race before.

One of the biggest tasks, though, was creating the course. Miller hopped on a bike, and used a device to measure the mileage precisely. And he had to measure the 26.2 mile course more than once.

“I remember coming down the last few miles by Soldier Field and a Pink Floyd concert was going on, and I just went by still measuring,” Miller reminisces. “The course has been changed several times since then, but all for the better.”

Come race day, everything went pretty smoothly. More than 4,200 runners participated in the races debut, and 2,128 finished. Dan Cloeter and Dorothy Doolittle were the first male and female winners of the Chicago marathon, with times of 2:17:52 and 2:50:47, respectively.

The 1978 marathon, though, was not as easy. After receiving many requests to change the start time and entry fee of the race, the founders could not agree on a decision. Some wanted a $10 entry fee with a noon start time to draw more spectators and publicity, but the others claimed the late starting time could be potentially hazardous to runners if it’s hot out. In fact, this debate is what created the Chicago Area Runners Association (CARA), when Dr. Nequin and Mier decided to leave the marathon committee and form their own group.

“Nequin said start times for a long race should be 8 a.m. at the latest,” Miller says. “These were in the days when you couldn’t Google other race statistics, so we didn’t have any idea.”

In the end, the race time was moved to 10:30 a.m., and the entry fee was $10. It didn’t stop there, though; thousands of participants wore black armbands to protest the later start time, and because of the hot temperatures, nearly 300 runners were treated for blisters and heat exhaustion. And the following year, the race was moved to October.

Although the race did not have a sponsor for the first two years, Beatrice Foods took over in 1979, and kicked off the races’ annual success, Miller says. Runners were given Tropicana orange juice and Dannon yogurt at the finish line.

Also at this time, Miller stepped down as race director and passed the torch to Bob Wright. Beatrice Foods dropped its sponsorship after the 1986 race, and Wright could not find a replacement, so unfortunately there was no 1987 Chicago Marathon. Luckily though, a group came together to organize a half marathon to allow Chicago runners to still compete.

In 1988, Old Style claimed the Chicago Marathon, and the race returned, despite the unseasonably cold weather for the end of October. And in 1989, runners battled the unseasonably warm temperatures, perfectly depicting the unpredictability of Chicago weather.

“We started one step at a time building the event from the ground up and having a solid race day experience,” Pinkowski looks back at his first few years. “The community has been amazing with support, and the sponsors all contribute to success we’ve had.”

In 1994, the race became the LaSalle Bank Chicago Marathon, and because of the new sponsorship, the race went back to the world’s top races, a position not held since 1986. Over 10,000 runners competed in the 17th Chicago Marathon.

Finally, in 2007, the 14-year sponsorship of LaSalle Bank ended when the Bank of America acquired the race on its 30th anniversary. In its first year as the Bank of America Chicago Marathon, Nike also came on as the new footwear and merchandise sponsor, making the 2008 race the biggest one in Chicago yet.

“I think the big move forward was developing this consistent and respected sponsor,” Miller says.

MILES OF MILESTONES
With a race that’s been around for nearly 40 years, and has experienced as much change and growth as the Chicago Marathon has, not one moment can be depicted as the best, Pinkowski says. That’s why he looks back on the several milestones of the race.

“There’s been so many benchmarks over the years,” he says. “I remember the first time we raised $1 million through our charity program … and the numbers of people registered and how quickly they register are all part of it.”

The first big record of the Chicago Marathon was on its 20th anniversary in 1997; not only did it have a record number of registrants, but was also the first time all 50 states were represented. There was also a 202 percent increase in foreign runners, totaling 1,074.

Then in 2000, 27,956 runners crossed the finish line, making it the fourth-biggest marathon in history. And every year after that, more involvement records were set.

In 2007, 36,000 runners competed, and 45,000 the year after. That number became the capacity of the event, and in 2011, registration was sold out in a record time of 31 days. This became a repeating pattern, ultimately leading to the marathons lottery system which began in 2014.

There’s also been numerous record race times set at the Chicago Marathon; in 1984, Steve Jones unknowingly set a World Record time in the men’s race with a time of 2:08:05. Also in ’84, Rosa Mota beat the women’s course record, which she set the previous year, at 2:26:01. And in 2002, Paula Radcliffe crushed the World Record in the women’s race by 89 seconds running a 2:17:18.

One lady known for her record-setting streak is Ann Walters Thompson. Thompson, who broke her back at 16, won the women’s wheelchair competition from 1990 to 1996, the only athlete to ever have won seven consecutive Chicago Marathons.

“It’s like my hometown race, and a race that’s very welcoming for wheelchairs, so I really enjoyed it,” Thompson says.

As the Chicago Marathon continued to grow in participation, it also had to evolve in many aspects to keep up. In 1998, race organizers implemented the ChampionChip timing system to ensure precise timing for the runners at the start, half-marathon mark and the finish. This also allowed officials to know exactly how many runners started and finished.

In 2008, the elite athletes started five minutes before the Open field for the first time to space out runners. Also in this year, the number of aid stations were increased from 15 to 20.

THE WINDY AND RUNNING CITY
After 26 years as race director, Pinkowski values how much the Bank of America Chicago Marathon has grown, and attributes a lot of that to the running scene in Chicago.

“Twenty-six years ago, people looked at the marathon as an ‘extreme experience,’ but now it’s become so mainstream,” he says. “[The Chicago Marathon is] a traditional weekend that people mark on their calendars, and I think the acceptance of the marathon has changed dramatically.”

While many travel from different locations to compete in the annual race, the number of local competitors is what really reflects this growth, Pinkowski says. The thousands that train locally for the race on the lakefront and suburb trails compared to the handful when he first began proves that the marathon remains relevant.

The quality of the training has improved, too. The number of coaches that center their plans around the marathon, and teach athletes how to stay healthy and what to wear complements the runner experience, Pinkowski adds.

“With all the training groups and friendships formed, you don’t hear the ‘loneliness of the long distance runner’ anymore,” he says. “And there’s such an access to talented coaches and information, it’s been a big asset … it’s just a wonderful environment.”

The number of female runners has also increased drastically; 26 years ago, less than 5 percent of the finishers were women, but now it’s almost half.

No matter how much the race changes over the years, Thompson says she will always appreciate the environment of Chicago out of all the other races she competed in.

“I always liked the fall marathon, and you never know what to expect … it’s been hot, and -20 and snowing once and raining once, I kind of liked that,” Thompson says. “And I also liked the fact that it was very flat.”

In the future, Pinkowski says he and his team will continue to do whatever it takes to improve the running experience. They usually begin evaluating a few weeks after a race ends to plan for the next year, and definitely rely on feedback.

“For a lot of people, it’s their first marathon, and the most memorable,” Pinkowski says. “I enjoy creating an event that is the ultimate expression of running … for us to continue to create that opportunity for people in Chicago to be a part of a world-class marathon event, that’s very rewarding.”

All numbers and statistics gathered from www.chicagomarathon.com/press-center/race-history/.