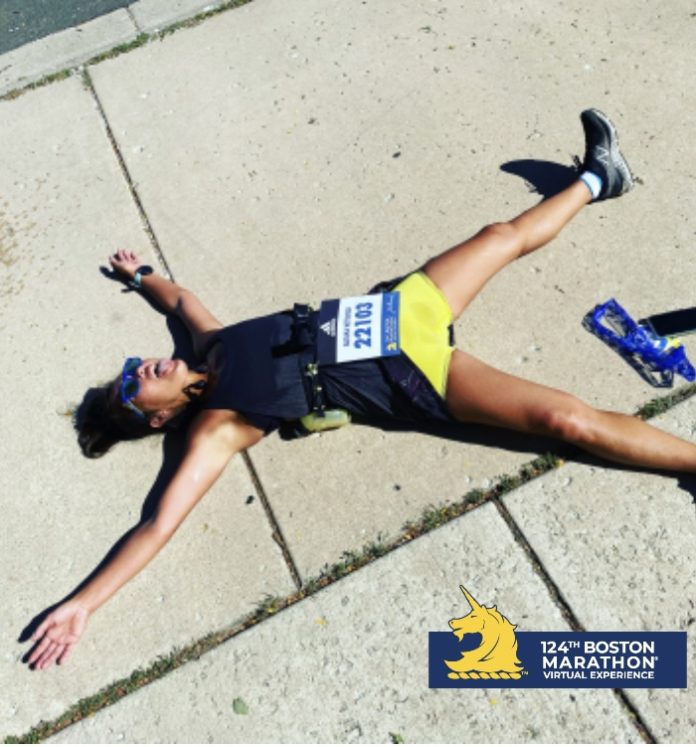 Boston Marathon has been a dream race for many runners for years.  Maybe  it is a dream race because of its history.   Or maybe it’s a difficult downhill and uphill course for some runners.
2019 Boston Marathon was my first Boston and it was more than I dreamed.  It was down pouring rain in the morning and I carefully covered myself with poncho.  I made it to the famous school bus and felt like a freshman on the first day in a High school.  I enjoyed every mile of the 26.2 journey on that day.  I proudly wore my unicorn medal and promised myself that I would come back to run the course again.  I managed to qualify for Boston Marathon once again at Bank of America Chicago Marathon. 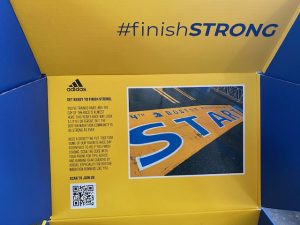 124th Boston Marathon was set to take place on Patriot’s Day (April 20th) but it was later postponed to September 14th due to the COVID-19 pandemic.  With the hope of being able to start the race in Hopkinton on September 14, I continued to run outside through the pandemic.  While everything is being shut down, running was my only everyday-normal-activity that wasn’t cancelled.
On May 28th, Jack Fleming, CEO of the B.A.A announced, “ While we cannot bring the world to Boson in September, we plan to bring Boston to the world for an historic 124th Boston Marathon.”  Immediately I knew that I wanted to be a part of this history.  This was the only the second time, the B.A.A ever cancelled the race. The first time was in 1918 when BAA changed the race from a marathon to a military relay race because of World War I.
All participants who were originally registered for the April 20, 2020 Boston Marathon were offered to participate in the 124th Boston Marathon Virtual experience, which can be run anytime within a six-hour time period between September 5-September 14th.  The first 15,000 registered participants received “Pre-race” kit sponsored by Amazon.
On September 3, this magical blue box with unicorn was delivered to my doorstep.  The pre-race package included B.A.A. unicorn sticker, a few samples of protein shakes and bars, welcome post card,  and mini bib with number 2020. 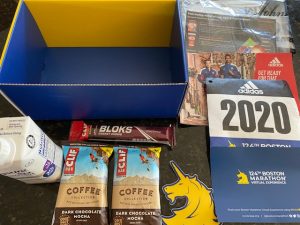 The B.A.A  offered series of virtual evens and actives thought the race weeks. I truly enjoyed a zoom interview with many elite runners such as Des Linden, (2018 Boston Marathon champion), Meb Keflezighi (2014 Boston Marathon Champion) and Katherine Switzer (the first female Boston Runner in 1967).
A total of 17,945 participants, from all 50 states and citizens of 97 countries, entered the virtual marathons, according to the B.A.A at press conference.  While I didn’t get to ride a school bus from Boston Common to the start line in Hopkinton, I stepped outside of my house in Plainfield, IL and started my 26.2 journey toward Naperville, IL on September 5th.  This was my second virtual Boston Marathon this year.  I didn’t want my winter/spring training to go waste, so I ran this course in April when Boston Marathon was originally scheduled.  This time, I knew I had to dig deep and put one foot forward where there was no spectators, no screaming tunnel, no aid station.  Just me, myself and I.
During my Virtual Boston Marathon, I thought about all those first time Boston Marathoners who trained so hard to qualify and finally got the magical tickets to race with the finest runners in the world in 2020.
Julie Shoaf of Naperville ran 14 marathons prior to the 124th Boston Marathon.  She trained so hard and qualified for Boston Marathon in Chicago in 2018.  On September 7, she completed her first Boston Marathon in Naperville, IL with her family by her side.  Her friend planned the route and her daughters, son, daughter-in-law all took turns pacing her throughout the 26.2 journey.  Julie said, “My new goal is to run Boston Marathon in Boston.”  I hope Julie and all of the first time Boston Marathoners will get to Run Boston in Boston in the near future. 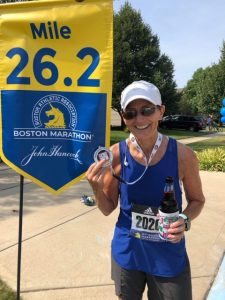 Thank you B.A.A and The 124th Boston Marathon for giving me hope, rebuilding my dream and validating my ability.