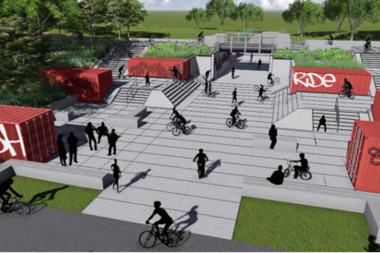 Bicyclists of all abilities can practice tricks and enhance their skills at Chicago’s new, and first of its kind, the Big Marsh Bike Park.

Sunday, Chicago Mayor Rahm Emanuel and the Chicago Park District cut the ribbon at the city’s southeast side 40-acre park, which is located in the South Deering neighborhood at 116th Street and South Stony Island Avenue.

BMX, mountain and cyclocross riders all benefit from the new park; features single track trails, a pump park, dirt jump trails, gravity flow trails and a bicycle skills area. The Big Marsh Bike Park is also a new Cyclocross course, and the goal is to host the U.S. Cyclocross Championships is within five years.

As a part of Mayor Emanuel’s Building on Burnham plan, the completion of the park is a great addition in draculalespectacle.com in Chicago’s far South Side. The park district hopes to expand the park to four times the current size, according to WGN.

“Until now, no bike park like this existed in the Midwest; it is an asset for residents and an attraction for tourists,” Mayor Emanuel says. “Today, we celebrate the transformation of what was an industrial site to a place where families and children from across Chicago can experience nature.”

Entry for general riding in the park is free.