Home Features 4 New Fitness Classes to Amp Up Your Regimen 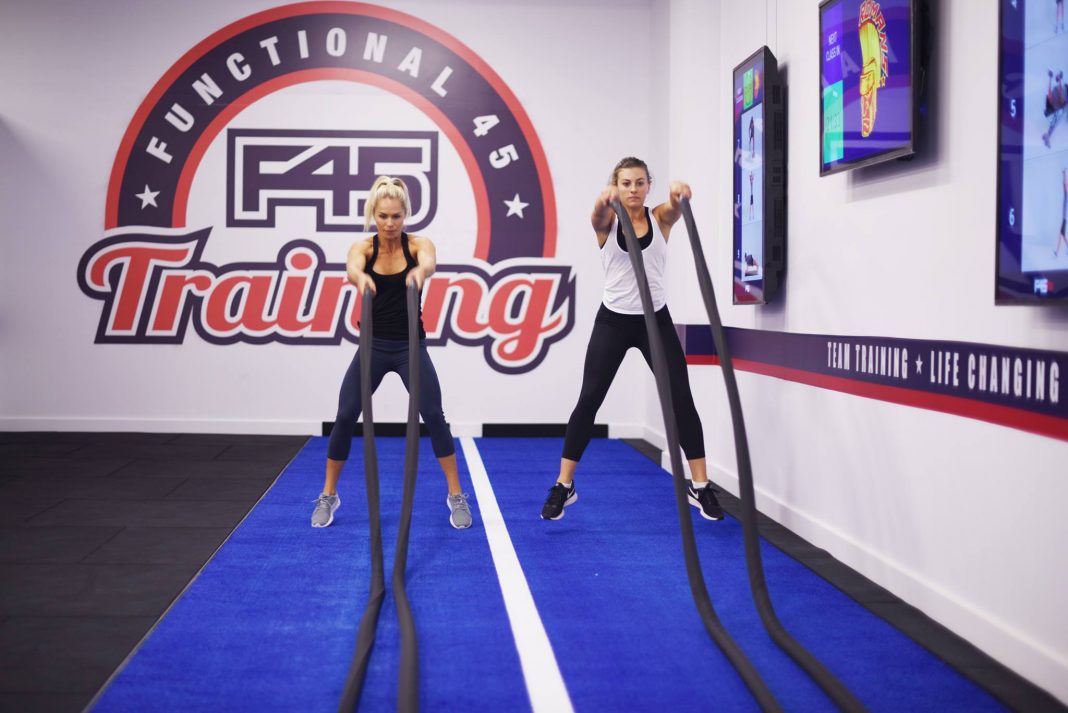 March is a tricky month for athletes – the initial motivation that comes with the new year might be fading, but with spring and marathon training season right around the corner, slacking isn’t really an option. In Chicago, however, the weather might not yet be conducive to consistent outdoor training; what better time to try out some new fitness classes?

I went to four newer classes that have locations both downtown and in the suburbs to help you find a class that will reignite your love of working out. Plus, they all have a first-timer discount so you too can try them all!

Well-Fit Triathlon & Training is a very popular facility downtown for endurance athletes to train especially in the colder months with its endless pool, CompuTrainer cycling studio and training programs. Recently, Well-Fit added a simulated high altitude room, where the oxygen levels are adjusted to mimic being at 9,000 feet or higher. Athletes can practice Intermittent Altitude Training (IHT) on bikes and treadmills through Well-Fit’s available classes.

I’ve only been out west a couple of times, but I remembered how shocked I was when I merely walked up a small mountain and was winded; running seemed nearly impossible. I was pretty nervous to try out Well-Fit’s class, but after owner Sharone Aharon told me that an athlete’s endurance can be significantly improved after just eight sessions in a simulated altitude experience, I was excited. I mean, there’s a reason all elite and professional athletes train in Arizona and Colorado.

There was a screen in the room that told you what elevation was being mimicked, and as soon as I walked in the room I felt a difference. We did an interval workout on the treadmills, and Aharon had us all measure our oxygen levels after each set to make sure we weren’t losing too much. The class was only about 30 minutes long, yet I felt like I did an hour of hill training.

Each newcomer gets a free week at Well-Fit to try any of its classes, including the IHT. If I lived downtown, I definitely would consider going more often, because it’s a great way to get a hard workout in a short time, and add a totally different element that typically can’t be found in Chicago. Read more about the altitude training here. 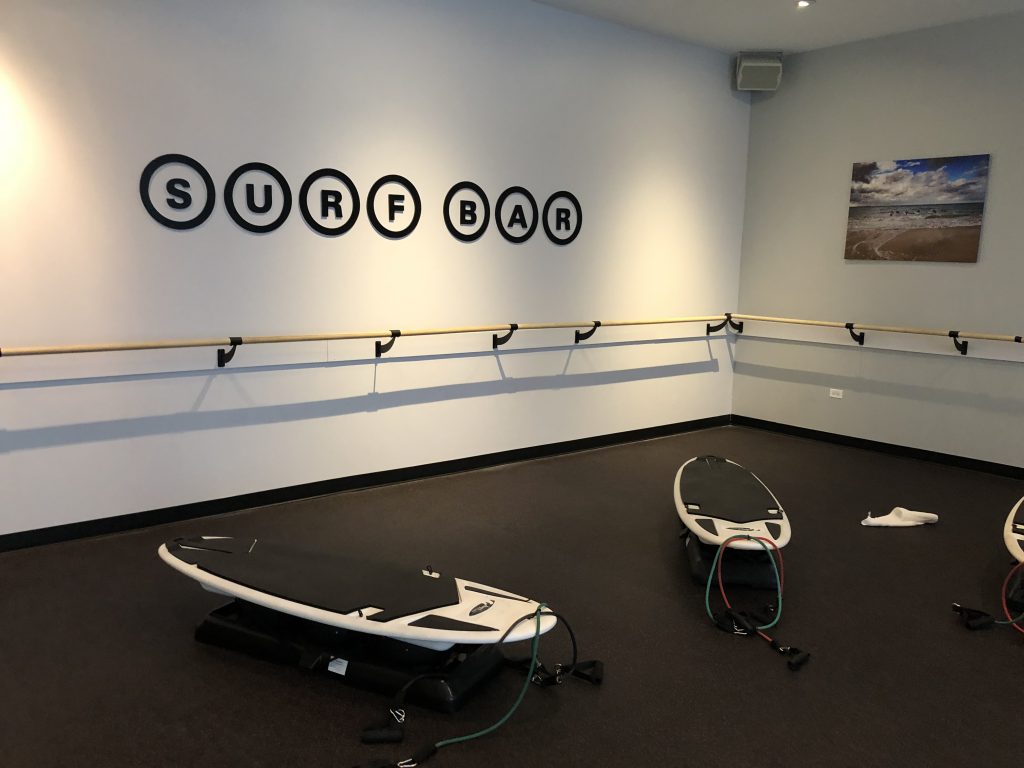 Surf Bar caught my eye because it’s your typical barre, yoga and Pilates studio, but it’s all done on surf boards. I’ve found that Pilates is really valuable for runners, so I take any opportunity I can to fit a session in, and thought adding an extra balancing component would be really fun and challenging!

I honestly didn’t know much when I first walked into the studio; I was happy to see that the surf boards were planted to the ground, so I couldn’t totally wipe out if I lost balance, but were elevated to make it more difficult yet realistic. There also were resistance bands tied to the end to incorporate a strength aspect. The class was small, but that made it more intimate and relaxed – three of us were newbies, so we were all able to laugh at our lack of coordination and stability together.

The workout itself was pretty standard compared to other Pilates classes I’ve taken, focusing on the core, butt, and smaller muscles in the arms and legs. However, the surf board definitely aided in that core work. It was helpful to have some Pilates experience so I knew generally how to do the moves, and could focus more on staying on the board and not worry about my form as much.

Surf Bar also offers a yoga class, a yoga and Pilates blend, and a cardio bootcamp. It is located in the Hang5 fitness studio downtown, that also has Fuse, Spring Fitness and Kick@55 in the same building. Break out of that winter rut and get a taste of summer on surf boards for only $15! 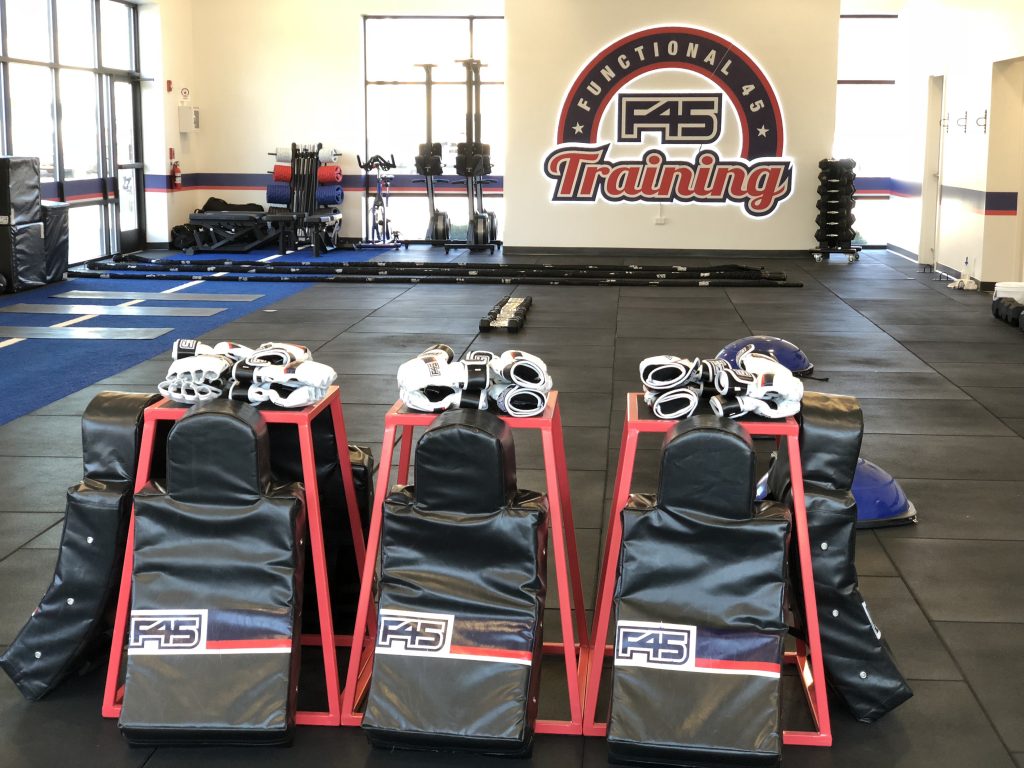 If you want to get ahead of the trends in the fitness industry, F45 is the place for you; F45 started in Australia and has become its third largest corporation, after McDonalds and another restaurant, according to the Glen Ellyn owner Tom Ullrich. After its success in over 500 locations across the country, it came to the United States last year, and by the end of 2018, over 50 gyms will open in Illinois alone.

So, what is it? F45 stands for Functional Training for 45 minutes – each class is 45 minutes long. F45 currently has 27 different classes available, but only one is available each day at several different times. The coolest part is that every location does the same exact workout at the same times as the others – while you’re dying in your 20th burpee, others across the country are as well.

I tried F45’s “Brooklyn” class, which is its boxing and martial arts focused class. The class was set up in three pods, each with three different exercises performed for 40 seconds, with a 20 second recovery, and then again, before rotating to the next exercise. Each pod was also completed twice, with a minute between each, for a total of 13 minutes. We did different punching bag combinations, core work, jumps, and used weighted ropes which was probably the most difficult part. As someone who likes to take their time at the gym, I was shocked how much of a full-body workout I got in just 45 minutes … I was a sweaty mess!

Ullrich assured me that if I ever wanted to do a Brooklyn class again, it would be different. I was confused how there were so many classes, yet workouts were never repeated, and he said there are people in Australia whose job it is to create these workouts; they also build a digital walkthrough video to be played on the studio televisions to help customers know the moves, and there are always at least two trainers on site to help as well.

Right now, F45 has locations in Glenview, Glen Ellyn, Evanston and Lincoln Park. Seven new downtown locations will open on March 22, and others throughout the suburbs and city following closely behind. Clearly F45 is taking over, so start your free two-week trial ASAP. 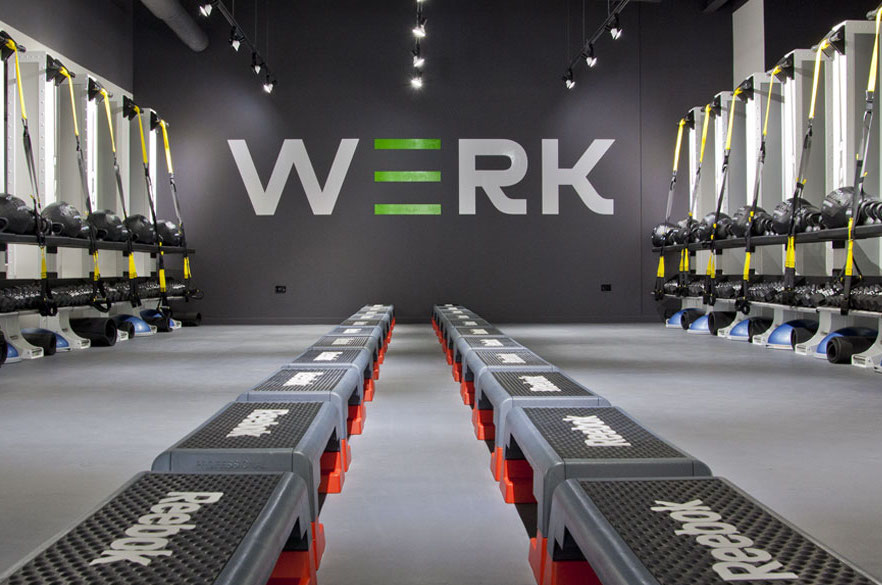 SPENGA isn’t as new of a class as the others, but it is expanding throughout the suburbs, so I thought I’d give it a try. Plus, I’ve heard great things, and love the concept of three workouts in one.

Specifically, SPENGA stands for Spin, Strength and Yoga; during each 60-minute class, each discipline is given 20 minutes of focus, starting with spin. I love spin classes, but usually get bored or impatient by the end of a full class, so this format was perfect for me! In fact, 20 minutes was a perfect amount of time to get in some sprints and hill climbs, and although recovery was short, we got the cardio out of the way first which I liked.

The strength session was really cool, as each person had their own station already set up for them with dumbbells of varying weights, a yoga mat, a step and other equipment to be used. We did a combination of upper body and lower body exercises following a 30-60 second pattern, with a minute recovery after each. These 20 minutes flew by, and I didn’t ever really catch my breath from the spin portion.

Finally, the yoga and stretching part came, which I can use all I can get as I tend to forgo stretching during my own workouts. We started with some more challenging yoga and balancing moves, and finished with a group stretch and Shavasna, which allowed us all to unwind and cool down after a tough workout.

I really liked SPENGA, and I’d definitely go back for more classes. Not only was the studio set up in a cool, modern way, but its format is perfect for those who struggle to fit a workout in somedays. Right now, SPENGA has locations in St. Charles, Glenview, Downers Grove, Oak Park, Elmhurst and Monkea, and an Evanston location is opening soon. Try your first class for free!