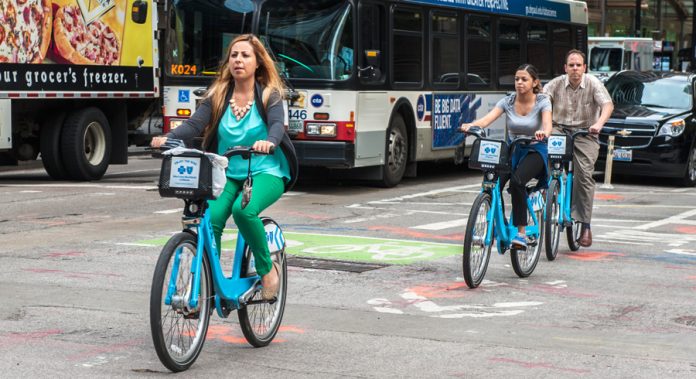 Divvy, Chicagoland’s highly-successful bike share system, had its most successful year to date in 2017, Divvy leadership announced today. With 5,000 additional new members from last year, and over 200,000 additional rides, Chicago residents and visitors pedaled the blue bikes more and further than ever before.  This year, with 7.3 million miles under its belt, the city took Divvy bikes the equivalent mileage of over 293 times around the earth.

“We are grateful to the thousands of Chicago residents and visitors who have worked so hard this year to turn Divvy into a crucial component of our city’s transportation network,” said Michael Critzon, Divvy’s General Manager.  “No matter the weather, you hopped on the blue bikes to streamline your commute, to build movement into your daily routine or simply to explore the city. Chicagoans are the reason for Divvy’s continued success, and we look forward to an even better 2018.”

Peak seasons also saw greater ridership than ever before; on July 8 alone, bikers rode over 22,000 times, and broke that 20,000 ride barrier over 13 additional times throughout the summer months. That led to a record-breaking peak riding season, with over 2.5 million trips taken by Labor Day – an 8 percent increase over rides during that time in 2016.

Divvy riders took advantage of fun promotions throughout the year, including ‘unicorn bikes’ HOLIDIVVY’ and even the ever-popular ‘Hot Dog Divvy’ for July 4th –all of which will make a reappearance in 2018, for Divvy’s 5th birthday.