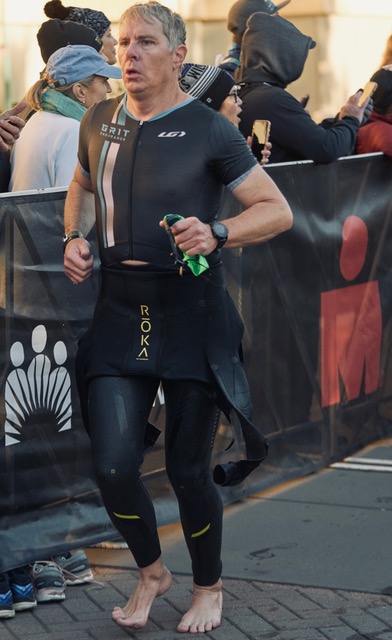 To participate in endurance sports is to be committed: to discomfort, to long hours away from family, to moving when you want nothing more than to be still, and to trusting that all of that commitment will result in something worthwhile—even when the “something” is just a cheap medal and bragging rights to the small percentage of your friends who don’t think you should be committed. When those results do not manifest, it feels like a betrayal.

According to my training data on the coaching and tracking platform Training Peaks, I have spent 131 hours on my bike, 144 hours running and 40 hours swimming in 2022. While Training Peaks doesn’t track the conditions in which I trained, I recall many, many hours of my training occurred in weather that I’ll just call “sub-optimal”, including an entire spring marathon spent running in a downpour. All of this effort was in service to completing my second full Ironman (140.6-mile triathlon) on October 23, 2022. As you may have surmised from the title of this piece, I did not complete that race. My day ended at mile 40 of the bike course due to a crash in an aid station that resulted in the aerobars of my bike to shear off as I plummeted over the top of them. Apart from some deep bruises on my shoulder and some road rash, I am physically ok… but man…the disappointment is crushing.

As an aside, don’t be the guy who swoops in and out of the aid station across someone’s line and hits their front wheel, causing them to fall and break their bike (or their bones.) If you do “accidentally” become that guy- at least don’t be the guy who keeps going like nothing at all happened. If you happen to be that guy from the race last week, you should avoid my teammates at all costs.

Part of the appeal of endurance sports is the possibility that disaster lies right around the next corner. We go into it with our eyes wide open, knowing that an untimely injury or illness can derail a great season, or that something as “simple” as staying hydrated during a race can cause ripple effects for your performance or even finishing a race. So, why, with eyes open at the start do I feel like my year was wasted?

For one thing, I am in the best fitness of my life at 53 years old. After the crash (and before the adrenaline wore off) I was already plotting how I could find another race before the season truly ends in North America in a few weeks so that my fitness is not “wasted.” With the hindsight of a few days of pain, I realize that my season truly is over, and it makes my heart hurt just a bit as well as my shoulder.

I know intellectually that good fitness is never wasted. It has value for its own sake, and in my case, will provide an excellent base for my off-season training– without the burden of having to recover from the damage an entire Ironman race causes. But still…

My friends sprung into action upon learning of my misfortune. My wife, Sharon, walked 3 miles of the course from where she was spectating to find me. Another dear friend drove through a vineyard to the aid station to pick up me and my bike so I wouldn’t have to wait for race support to get there. Try getting that much attention by merely finishing a race!

Because my day at Ironman California ended so early, I had the opportunity to spectate the rest of the event with my wife, and some of my best friends (and enjoy a few beers while doing so.)  And how is this for a silver lining- I got to cheer on a teammate as he became an Ironman for the first time, and watch a friend achieve a massive PR!

If you are involved in endurance sports, it is likely that you will experience the disappointment and heartbreak of a DNF or even a DNS at some point. It will hurt, and that’s ok. Let it hurt. Feel the feels. It will get better when you’re ready to move on. I’m still disappointed, but I think about how much money I saved in finisher gear, and I smile just a bit.