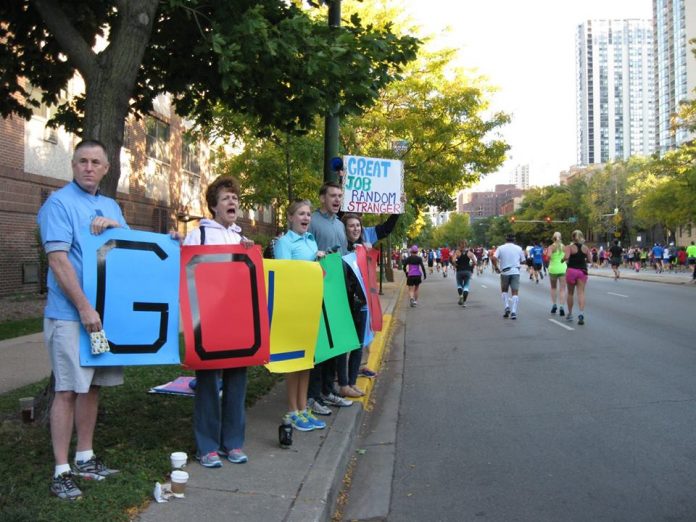 “One-point-seven million spectators who go nuts for everyone all day long,” will line the city’s streets for this year’s Bank of America Chicago Marathon, elite runner Tera Moody says. If you will be one of those 1.7 million, are you ready? Read on for advice to enjoy one of the world’s biggest marathons as a spectator.

1. Volunteer: Running can be “a selfish sport,” says Moody, who will run the Bank of America Chicago Marathon for the sixth time this fall. She learned to love the race as a teenager, working at a water station with her high school team. When she runs through the Loop and hears the “deafening roar” of the spectators, she gets an extra boost when she sees the orange and black of her alma mater, St. Charles East High School.

2. Do your homework:  If you plan to follow a friend or loved one, know his or her goal pace and track him or her online. Knowing whether or not your runner’s pace matches his or her goal is critical, Moody says. She looks forward to seeing her parents at specific points throughout the race and “hearing your name makes a world of difference,” she says.

3. Wear layers: Ben Polancich, who has seen a half dozen races since 2004, says he has “watched in all kinds of weather – cold, freezing rain, extreme heat, and everything in between.” Come prepared for Chicago’s variable October conditions to ensure your own comfort.

4. Prepare like you’re going to race: Will Bridge, Universal Sole employee and finish line volunteer, says you should get plenty of sleep on Friday. Like everyone toeing the line on Sunday, you will have to be up early.

5. Be prepared to see something you’ve never seen before: Bridge says his favorite memory from his 30 years of Bank of America Chicago Marathon experience was in 1984, “when Steve Jones [set the] world record ten miles ahead of me, and then I strolled over to a friend’s apartment and watched the Bears thrash the Buccaneers 44-9.” Moody’s voice enlivens when she remembers the “male cheerleaders at mile 8 or 9” at which point she lead the race in 2009. Polancich also remembers seeing runners and spectators alike in costume. At the stretch of Broadway between Addison and Belmont in Lakeview in 2014, he saw “the Chicago Spirit Brigade do their routine to RuPaul’s ‘Sissy That Walk’ about five or six times” in the half hour he spent there.

6. Get thee to the South Side: “If you really want to be a friend,” says Moody, “go to mile 22.” Around this point, many runners hit the wall and could use a boost. It’s also, says Moody, “so Chicago and totally appropriate.” Runners turn right on Wentworth, away from the finish line, “and you’re on your own,” she says.

7. Map your route: Bridge also likes “the spots just off the Red Line on the South Side.” The official marathon website, www.chicagomarathon.com, lists convenient CTA stops. The web site also offers advice for connecting with your runner after the race and a full spectator’s guide as a downloadable PDF. Make plans ahead of time with your runner in case cell towers and servers can’t handle all the traffic on race day.

8. Find your own favorite spot: If you follow a runner all day, “you only get to see them for a few seconds when they pass by,” says Polancich. “It’s a great excuse to explore different parts of the city.”

9. Be prepared to be moved: “One of my favorite memories,” says Polancich, “is seeing a runner who had the words ‘Tell me John would be proud of me!’ written on her shirt, referring to a loved one who had passed away. Seeing complete strangers yell this out to her while she went by was so moving, and I was so happy for her.”

10. Know your role: “You’re right there on the course,” says Moody, “helping people accomplish their dream.” She’s raced all over the globe, but nothing compares to the amazing spectators in Chicago.